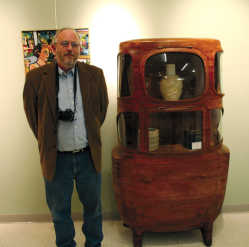 David Herrold stands next to a china cabinet he made in 1971. Herrold said it was the first serious work in wood he has done. Banner Graphic/JOSH GARVEY

GREENCASTLE -- The Putnam County Museum was host to a father-daughter event that was a bit different from the school dances that might come to mind: A father-daughter art show.

Jennifer Herrold talked about some of the influence her family has had on her art when she spoke about the show. 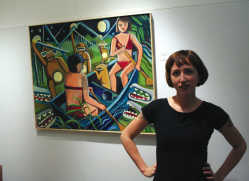 Jennifer Herrold stands next to her painting titled "Costa Rica Crocodile Tour." Herrold and her father were at the Putnam County Museum Thursday night showing their art at a father-daughter art show. Banner Graphic/JOSH GARVEY

"Both my parents are artists; my mother's a textile artist and Dad was always in his shop," she said.

Jennifer Herrold said she has included some of her father's art in her paintings. She said some sculptures he did in the '80s that were silver, pop art busts made it into one of her paintings.

"I liked those," Jennifer Herrold said. "You seem to shun those now. I did one painting of his busts reproduced several times, kind of flying around."

"It feels a lot like being in grad school," David Herrold said. "My professional life then was to dream up cool things to make and I didn't have classes to worry about and things like that. I've always thought of that as one of the most fun periods in my life and I'm kind of recreating that."

David Herrold said he has two home studios where he works now -- one for woodwork and one for clay, and said leaving DePauw has allowed him to do more wood work.

"Since I had been teaching I pretty much stuck with working in clay," he said. "I did a few pieces in wood but nothing serious."

David Herrold said most of the wood pieces he had on display were done last winter.

Jennifer Herrold talked about some of the quirks and little tricks she used in her art. She said chickens could help with compositions, because they could fit anywhere. She also mentioned referencing her own art.