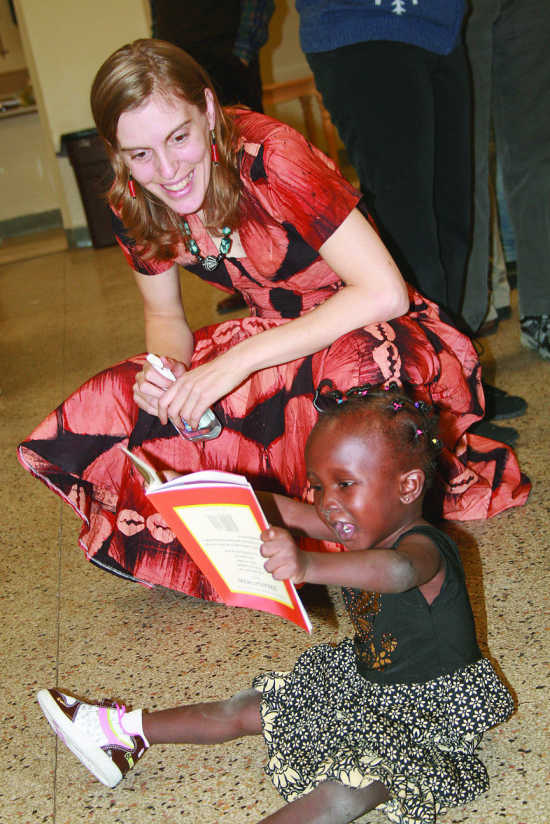 Two-year-old Kalila Mahama reads a book with former Greencastle resident Taren Stinebrickner-Kauffman, who, along with her parents, Bruce Stinebricker and Kelsey Kauffman of Greencastle, led a fundraising drive to help pay for life-saving heart surgery for the toddler.
Order this photo

On Tuesday, a vibrant Kalila was in Greencastle to celebrate her recovery from the procedure with a group of people who helped make it happen.

Kalila underwent heart surgery on Dec. 13 at Riley Children's Hospital in Indianapolis. The entire procedure was paid for through donations -- many from individuals and families in Putnam County.

Stinebrickner-Kauffman left her job with the Alliance for Climate Protection in Washington, D.C. in August. She planned to go on a six-week backpacking trip through Africa, and set about planning the excursion.

"My mom went to grad school in Australia 30 years ago with Faiza's grandfather," Stinebrickner-Kauffman said. "My mom suggested that I go to Ghana to see him, so I decided to make Ghana a central part of my trip."

The first day Stinebrickner-Kauffman was in Africa, she went to the home of her mother's graduate school friend Abdulai Iddrisu. There, she met Faiza, Samad and Kalila.

She also found out that Kalila had been diagnosed with Tetralogy of Fallot (TOF), a congenital heart defect that usually consists of four anatomical abnormalities (although only three of them are always present).

TOF results in low oxygenation of blood due to the mixing of oxygenated and deoxygenated blood in the left ventricle via the VSD and preferential flow of the mixed blood from both ventricles through the aorta because of the obstruction to flow through the pulmonary valve.

The primary symptom is low blood oxygen saturation. Other symptoms include heart murmur, difficulty feeding, failure to gain weight, slow growth and physical development, dyspnea on exertion, clubbing of the fingers and toes and polycythemia.

Kalila was diagnosed by doctors from Children's Hospital Boston who were at a teaching hospital in Ghana. Doctors told Kalila's parents that without surgery, their daughter would die.

To add to their despair, Faiza and Samad discovered there was nowhere in Ghana to have the surgery done. And even if there had been, the couple -- who both work but bring in an annual income of about $8,000 -- had no way to pay for Kalila's operation.

Stinebricker-Kauffman was immediately taken with Kalila and set about finding a way to help her. She contacted her parents, who solicited donations from their family and friends in Putnam County. At the same time, Stinebrickner-Kauffman began collecting donations from her friends in Washington, D.C., where she has lived for the past six years.

"We said, 'Let's just start with our friends,'" Kauffman said. "We asked for an average of $100 from each. I never, ever expected we would raise everything we would need."

More than 200 donations came in, and before long enough money had been raised to fly Kalila and her parents to the United States and pay for the surgery the toddler so desperately needed.

The donations have, in fact, exceeded the needed funds. Kauffman said she has offered to give back donations that were not used. Any donations that do not go back to the contributors will be forwarded to the Rotary Gift of Life Program, through which American doctors travel to the Middle East to perform life-saving heart procedures on children in need and educate Middle Eastern doctors on how to do those procedures.

Ideally, Kalila should have had the surgery long before she did, Stinebrickner-Kauffman said. Even so, she is doing very well.

"Her legs were very weak from lack of oxygen," Stinebrickner-Kauffman said. "She would try to pull herself up to walk, but she needed to hold onto things with two hands. Now, she only uses one. She can crawl all over and not get winded like she used to, and I think she's eating a lot better."

Stinebrickner-Kauffman has forged a strong friendship with Kalila.