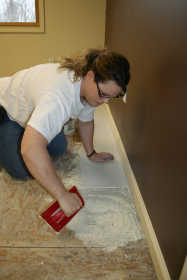 GREENCASTLE -- A Greencastle firefighter is building her own bakery kitchen -- one deal at a time.

Christy Glass began making baked goods to earn some extra money while trying to have children.

"We've been trying for 10 years to have children and couldn't," she said. "We exhausted our finances in fertility treatments -- about $40,000 worth. That's basically how we started the business -- to raise money to pay for fertility."

Glass, who serves as a firefighter with the Greencastle Fire Department, said she started an in-home baking business six years ago. For the past three years she's been trying to get her own business space.

"It's just financially hard," she said.

"I started baking for friends here and there, and they said 'you really could be good at doing that,'" Glass said.

She said she found working on the cakes to be a stress reliever.

"I go to my regular job and I'm with men all the time. It's kind of stressful," Glass said. "Then I come here and I get to be by myself and I get to bake. Decorating -- especially wedding cakes -- is a big stress reliever. It's very challenging and it's just a way that I can let go of everything."

She and her husband Doug did eventually have children -- first through adoption and then through childbirth.

"Isaac is almost 3 and Chance is 6 months," she said. "We finalized Isaac's adoption Oct. 29 of (2009) and then two weeks later we got pregnant. So we got our gift from God, which is Isaac, and then our miracle of God, which is Chance."

Glass's children helped to lead to her new business, which is upstairs from the childcare she uses, Brighter Horizons. She is completing an unfinished upstairs area of Brighter Horizons as her bakery, which she is doing in exchange for flexibility with rent.

Glass explained the need for her own bakery when she said how overtaken her home had become.

"Putting cakes on the washer and dryer and the tables and counter tops is just overwhelming," Glass said. "It was getting so big that I needed to get out of there."

Glass began working on the space Jan. 1. To fill her new kitchen, she has been scouring free and reduced price services such as Craigslist for discounted or free equipment. She got a free dishwasher, free sinks and free countertops that way.

"I just got back (two weeks ago) from Cleveland, Ohio from getting my oven. They have auctions online for used restaurant equipment," she said. "That's a $2,500 used oven that I got for $165. To ship it here was going to cost over $300, so I just drove up there since it was cheaper."

Glass said it took 17 hours total to get the oven from Cleveland because of truck issues.

Glass said she hopes to stay at her current space for two to five years before opening a more traditional bakery. No matter how busy she gets making cakes, she said she will stay at the fire department.

"I'll be a firefighter until I retire," she said. "That's my retirement. That's my guaranteed income. With the economy as bad as it is there's no telling how well I'll do (with the bakery)."

Glass acknowledged her schedule could get overwhelming, but said she knew that was part of trying to get her business going.

"There are some people that are fortunate enough to have all the money to do it, just lay back and say, 'OK, I want it done on this day and I'll open.' I've got to do it all myself," she said.

Glass isn't alone in her endeavor. She says she relies on her husband and other firefighters.

She also said it wouldn't have been possible without Hollie Wyatt with Bright Horizons Child Care, who helped her to find a space and also provides easy access to childcare while Glass bakes upstairs.

That said, Glass is still devoting a lot of time to her new adventure.

"I'm one of those women that can't sit still for too long," Glass said.

Glass's store, Creative Cakes, is opening Feb. 15 by appointment only with an open house Feb. 19 from 1 to 4 p.m at 1285 S. Jackson St., Suite B, which enters through Brighter Horizons