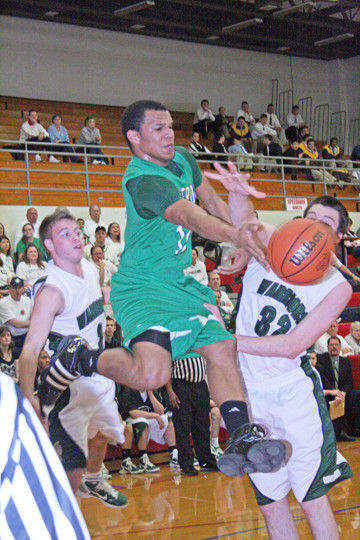 Cloverdale junior Donovan Scisney (above) hangs in the lane before making a pass during Friday's sectional contest against Covenant Chrisitan.

GREENCASTLE -- The willingness to fight is something every coach hopes for in a team. In Friday's sectional semi-final, the Cloverdale Clovers fought for 32 minutes, but even that wasn't enough to upend a hot shooting Covenant Christian squad.

The Clovers lost to the Warriors 60-44, but showed the determination and drive that has been a signature of the team all season.

For head coach Pat Rady, who's in his 47th season of coaching, he wanted the team to not dwell on the outcome of a single night, but the accumulation of the entire season.

"I can't fault the players and I told them we don't want to get caught up in remembering the last game," Rady said. "Because of what we've accomplished and you've got to look at the whole season. We placed well in the conference, we won a holiday tournament, we're finishing 11-11 and so remember the whole season, not just the last game."

Both teams began the game on the attack, but it was clear from the get go Covenant Christian had their long range shooting dialed in. The Warriors hit 7-of-11 three-pointers in the first half, but the Clovers kept nipping at their heels.

While the Warriors were making their mark from long range, Cloverdale did most of its damage from 15-feet and in and kept themselves in the contest by capitalizing on good interior moves.

The Clovers trailed by just three at end of the first quarter and by seven at the half, 30-23. If the Clovers could limit the Warriors scoring from the outside, it looked like a win was within their grasp.

However, as Covenant Christian's outside shooting cooled off, it was able to move inside the arc and continue to inflict damage on the Clovers. Still, Cloverdale was able to keep the game within reach, with senior Jordan Hayden scoring five points in the third quarter, with fellow senior Josh Burdette adding two points and junior Donavan Scisney adding one point in the quarter.

But in the end, the Warriors were just too much for Cloverdale. The Clovers were outscored 20-13, including 8-of-10 from the free throw line, in the final stanza and lost by a tally of 60-44. Fittingly, it was a senior, Chris Arnold, who scored the final points for CHS, knocking in a very long three-pointer before the buzzer.

Following the contest, Rady acknowledged how much of a challenge the Warriors were.

"Covenant Christian is a fine ball team," he said. "They shot well tonight and I thought we had a hand up, some of their guys hit threes that they'd only hit one three all year. As they say, sometimes the bear gets you and sometimes you get the bear.

"We came out and battled and they played to win," he added. "They didn't play afraid to lose and we played to win and that's all you can ask of a group of young men. I'm just very proud of them."

As Rady spoke about the game, his focus shifted to the season and the skill each of the players, especially his seniors, displayed over the course of the year.