Are you a bully? 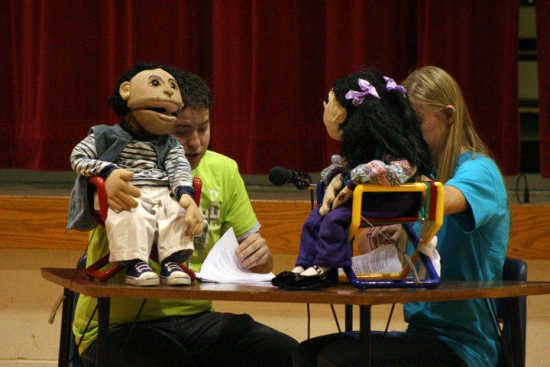 Ben, played by Cody Warren, talks about bullies and their behaviors with Rachel, played by Emma Young, Thursday at Central Elementary School.

It isn't hard to convince kids bullying is bad. Even the bullies understand that.

With the prevalence of bullying among kids and adults, though, the more important lesson is exactly what a bully is. It's even worth having the kids ask themselves, "Am I a bully?"

This was the aim of a Central Elementary program presented by Mental Health America and the Central PTO on Thursday. Ten students from South Putnam High School volunteered to spend the afternoon at Central teaching the children about bullying through a puppet show and several live action skits.

"You can't tell bullies by looking at them, but they have one thing in common -- they have to be in control," said Rachel, a puppet controlled by Young. "It's their way or no way."

Rachel and Ben (Warren) had a long conversation about exactly what bullies are and what can be done about them. At the end of their conversation, they turned to the students to ask themselves some questions about whether or not they might be engaging in bullying behaviors.

Some questions were obvious, such as "Do you push, shove or touch people in a threatening way?" Many others were less so:

* Do you roll your eyes when someone annoys you?

* Do you whisper in front of someone?

* Do you want other students to think that you're the toughest kid in school?

* Do you always blame other people for things that go wrong in life?

* Do you get angry or jealous when someone wins something and you don't?

* Will you do just about anything to get attention even if it means putting someone else down?

The questions went on and on, but the message was clear -- everyone can be a bully sometimes. Combatting bullying may be about more than just finding the bullies and teaching them a lesson, it's also about making sure people realize when they might be acting like bullies.