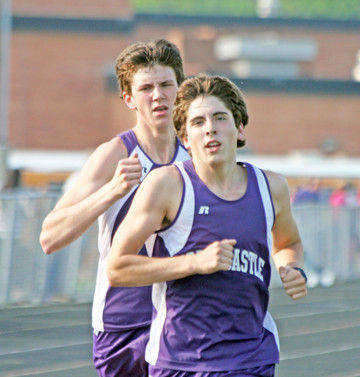 The Greencastle boys' track team won the 2011 Putnam County Championship Tuesday outdistancing North Putnam by 30 points, 88-58. However, both squads posted six wins on the night to lead all teams. Cloverdale edged the Eagles for third place, 49-48.

"The guys did well," GHS head coach Mike Schimpf said. "We really felt like it was going to be a close meet with us and Cloverdale. Cloverdale had such a great outing last Thursday. They really competed with us and I hated to see some of their best runners go down because that's not how you want it to be. You don't want that for those guys, you want them to be able to come out and do their best."

The Tiger Cubs performed well in the distance events, winning both the 1,600- and 3,200-meter runs. The winning tandem was the same, but the runners shared the glory. In the 1,600-meters Tyler Hudson crossed the line ahead of teammate Ryan Stevens in a time of 4:45.18. In the 3,200-meters, Stevens and Hudson went out quick, hooked up and never looked back. Stevens took the honors in the event with a time of 10:56.62.

Senior Cameron Cash won the 400-meter dash in a time of 52.90 and Mitchell Robinson was first in the 300-meter hurdles in a time of 43.56. Hayden Stuckwisch took high jump honors, winning with a height of 6-3.

Schimpf got a nice performance from one of his athletes in the shot put. He also praised Mitchell, who is racing well wherever his coach puts him.

"Mitchell's been this great find that he showed up as a senior to run track finally. Now he's doing great in the 110 and the 300 and the 4x100 -- and about anywhere we put him he's been able to be successful. He's a good kid."

The odds were stacked against the Clovers from the get-go. Sprinter and long jumper Donavan Scisney was hampered by a back injury, ultimately dropping out of the long jump after one jump and not posting a time in the 100-meter dash.

Teammate Jeff Couse won the long jump with a jump of 20-7.5 and placed third in the 100-meter dash in 11.61. It looked like the senior might be able to spark his team, but as he was tearing down the straight away in the 200-meter dash, he pulled up and went to the track. After a visit from the trainer, it was clear Couse would be out of commission for the remainder of the race.

Joe Rumley ran a nice race in the 800-meter run, staying in front of a charging Hunter Barr from South Putnam and Eubank from Greencastle to win in a time of 2:06.77.

Sophomore Trent Workman provided the only win for the host Eagles on the night. Workman won the pole vault with a height of 10-feet even.

Schimpf liked the performance get got from his GHS squad Tuesday, but he knows bigger things are just around the corner, namely the conference and sectional meets.

"The guys have performed well here towards the end. But we have a few more meets, so we'd like to continue to get better. Hopefully we can do that," he said.

All four Putnam County teams will be back in action Friday at South Putnam when they compete in the West Central Conference meet at 5 p.m.

Full results will be printed in Thursday's edition of the Banner Graphic.