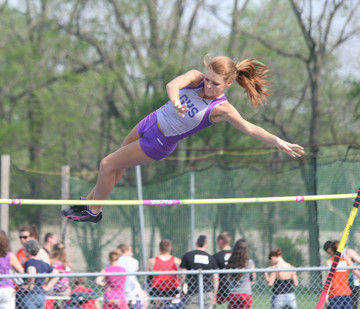 The Greencastle girls' track team racked up 10 wins en route to its Putnam County team championship win Tuesday. The Tiger Cubs won with a total of 115, with Cloverdale finishing second with 55. North Putnam nipped South Putnam by a single point for third place, 36-35.

"I can't complain," Anderson said with a smile. "These gals -- I'm so proud of the girls because I've been gone for four weeks and I was communicating via email to all the coaches, assistant coaches and the girls.

"Boy, oh boy, I couldn't ask for better," he continued. "They just came back like troopers. We got a performance tonight -- we had some girls step up. Weatherford, four wins -- that's good. Emily Crawley has ran some great races, Kara Birt in the 100 and 200, that was quite outstanding -- and also in the 4x100 relay."

In the 800-meter run, South Putnam freshman Mallory Glaze went out front early and led a few laps, before Greencastle's Emily Gill and Kayla Cash passed her and began duking it out for the top spot. The race was neck and neck, but down the stretch Cash gained just enough distance to earn the win with a time of 5:51.15 to Gill's 5:51.82.

Anderson recognized the drive his team displayed Tuesday, but knows that they'll need to bring it again as the conference and sectional meets loom on the horizon.

"I think our girls, overall, came tonight to run and compete and for that I couldn't ask for any more. We'll see what happens Friday night. It will be more competition and then Tuesday at sectional. But we're taking it one step at a time," Anderson said.

While they finished third overall, the North Putnam squad captured the second most wins on the night. Katie Douglas captured the Cougars' only running win of the night in the 3,200-meter run. As the runners settled in, Greencastle's Megan Hayes set the pace for the majority of the race, but in the latter laps, Hayes and Douglas battled for first place. When the bell chimed indicated the final lap, Douglas went out front and didn't look back. She won the event with a time of 13:10.56.

The Clovers finished second behind wins by sophomore Paige Gruener won the 100-meter hurdles in a time of 16.90 and Mariah Oetken took the top spot, edging out teammate Paige Sinks in the high jump with a height of 5-feet even.

All four Putnam County teams will be back in action Friday at South Putnam when they compete in the West Central Conference meet at 5 p.m.

Full results will be printed in Thursday's edition of the Banner Graphic.