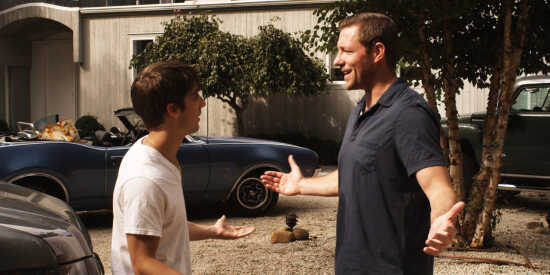 Edward Burns' ninth film was a return to his roots of sorts. "Nice Guy Johnny" is the same type of film that got the director's career going, "The Brothers McMullen", in the sense that it's a small movie with a passion for filmmaking at its core.

"Nice Guy Johnny" was shot in 10 days for $25,000 with a five person crew. Instead of throwing money at problems, Burns and crew were forced to be creative and the film benefits greatly from this.

The film is the story of Johnny Rizzo (Matt Bush), a California-based sports radio host who, in an attempt to please his fiancée Claire (Anna Wood), heads back home to New York for an interview with her father's friends' company.

He stands ready to give up his dream of becoming a more successful sports show host when his uncle Terry (Burns) convinces him to spend a weekend with him at his sweet pad in the Hamptons. As it turns out, Terry is a womanizing, carefree man who chases after married women and uses their generosity to his gain.

Intent on giving his young nephew a weekend to remember, Terry introduces Johnny to Brooke (Kerry Bishe), a former tennis star, and their connection is almost instantaneous. However, Johnny, unlike his uncle, is a man of virtue and attempts to distance himself from the beauty.

But as the grip of his domineering fiancé strengthens, Johnny's connection with Brooke grows and it's his time with her that leads to a showdown with Anna and him finally going after what makes him happy.

"Nice Guy Johnny" is more of the same from Burns and that's not a bad thing. While the faults with a small independent film are magnified because they aren't afforded the ability to cover it up with flashy effects or crazy camera moves, "Johnny" is a solid indie film.

Burns' Terry is the prize of the film. He's not the guy you want to be, but the guy you admire for his sheer honesty -- maybe not with the women he "dates," but with himself and those close to him.

Bishe is a breath of fresh air. She's natural and it's that earthy easiness that makes the character of Brooke so good. Of course there are scenes that are a little stale, but those are few and the film moves a good pace. Bush gives an admirable performance as Johnny and his contrasting personality to Terry works well.

Undoubtedly whenever Burns releases a film, the name Woody Allen comes up. It may be a generational thing, but if you gave me a choice of Allen or Burns, I would choose Burns any day of the week. Burns delivers small films with some great dialog and interesting characters -- some more interesting than others, but interesting nonetheless.

What I like about Burns is his desire to continue to make films on tiny budgets because of the challenge and the joy it brings. I have no doubt he could go for something with a much bigger budget with name stars at this stage of his career, but instead he goes back to what got him going. It's more than admirable -- it's inspiring.

The disc features a few deleted and extended scenes, a small interview with Burns and three minutes of casting footage. There's also a commentary track, which you'll find in the setup menu.

I highly recommend the commentary track. Instead of regaling us with funny tales from the set, Burns gives you a feature length film school. He talks about the ins and outs of the production and gives insights on how to make your own movie on the cheap.

Final Cut: "Nice Guy Johnny" is another solid outing from Burns and the "return to his roots" style project plays much biggest than its small budget would suggest.