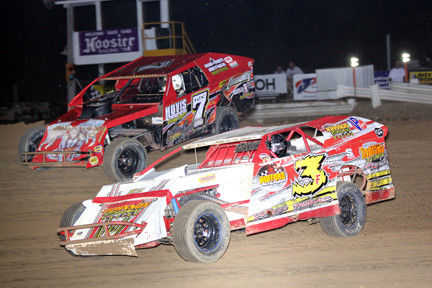 Rob Fuqua (No. 3f) and Richie Lex (No. 7) battle for a top-five spot in the UMP Modified feature at Lincoln Park Speedway on Saturday night. Fuqua eventually came home with a third-place finish to edge Lex at the finish line.

PUTNAMVILLE -- There was no shortage of passion on display for the racers and fans at Lincoln Park Speedway on Saturday night as increased purses added furor to the battles for the checkered flags.

One of the youngest and strongest throttles in the sprint car division, Braylon Fitzpatrick, started on the outside of the front row alongside Josh Burton in the sprint feature as veteran pilot, Kent Christian and Kyle Cummins were in row two.

The drop of the green saw a first lap red flag as Chris Babcock and Seth Parker became feature casualties after a flip. However, the re-start sparked a charge by Fitzpatrick into what looked like a victory cruise. Fitzpatrick led Cummins by less than a car length as the two fought for the top spot. Christian gave chase ahead of Dickie Gaines and Shane Hollingsworth.

Just under halfway in the main event, Fitzpatrick's chance for a second LPS win came to an end as he was sidelined with a mechanical problem heading into turn one. Chase Stockon, a night after ratcheting on a wing and waging war with the World of Outlaws at Bloomington Speedway, suffered a flat tire and went to the work area during the stoppage.

Stockon would repair in time and rejoin the feature at the tail as the A-main went green again with Cummins leading Christian, Hollingsworth, Gaines, Casey Shuman and Ethan Barrow.

One lap in, Hollingsworth dove to the second spot past Christian, who fought for third with Shuman.

Cummins owned the lead once he had the position and built upon the advantage as he mastered the legendary cushion at LPS. Cummins was able to pick up the win as he held his marks in lapped traffic over the final 10 laps to earn the victory. Hollingsworth maintained second, Shuman placed third after starting ninth and Gaines and Barrow wrapped the top-five positions.

There were some heavy regional hitters on hand for the UMP Modified feature with $1,000 going to the victor.

One night after riding the lightning to a B-main win at Bloomington and rocketing forward from the back to a potential top-five finish before losing a wheel late in the A-main, Bradley Sterrett started on the pole at LPS alongside Paul Bumgardner. Veteran Illinois star, Denny Schwartz was inside Chad Combs for row two with Greg Amick and Richie Lex in the third row.

Schwartz and Lex were locked in a heated battle from the start, swapping the point as Schuyler Nahre held third with Bumgardner, Amick and Rob Fuqua hanging it out on the edge for the fourth position.

Lex gathered the lead from Schwartz coming out of turn two, but it was short lived as a big collision on the front stretch ended Bumgardner's evening following a near flip. With the defending point champion sidelined, Lex snagged the re-start advantage and held it as Schwartz looked for an opening. Nahre and Fuqua were helmet-to-helmet in a chase for third.

With the laps dwindling, Lex caught the cushion in turn two and lost some ground as Schwartz moved into the lead before Danny Schwartz pulled off the top of turn three with a mechanical issue that brought out the final caution with one lap remaining.

With the door to a second feature win at the Putnamville oval slightly ajar, Lex gave chase with Nahre, Fuqua and Wes McClara, but no one could find a way past Schwartz over the final lap.

Nahre, Fuqua, Lex and Kenny Carmichael Sr., who came forward from the back of the A-main, capped the top-five finishers.

In the UMP Super Stock main event, Steve Peeden was able to defend his victory from last weekend at LPS after he battled his way past Slick Griffin on a re-start.

Griffin led early on as Peeden had his hands full with Jeremy Hines with Chris Hillman and Doug McCullough door-to-door behind them in a fight for fourth.

A caution re-set the field and on the green flag, Peeden was able to dive underneath Griffin to pick up the lead. From there, he started to pull away from the rest of the field. Just past the halfway mark, Peeden had a seven-car length lead over Griffin and a blanket could have been put over Troy Clark and McCullough with Hillman and Kenny Carmichael Jr. behind them.

On this night however, Peeden was not going to be caught as he scored the victory followed by Griffin, Clark, McCullough and Kris Starks, who powered up from a 14th-place starting position.

In the bomber A-main, Dustin Shoulders captured his 25th feature win in his No. 65 machine after working through the field from 10th. He slipped past Scott Tidwell late in the feature to earn the win after several laps of side-by-side action. David Bumgardner, Josh Fag and Daniel Foxworthy were top-five finishers.

Next weekend will feature the sprints, modifieds, super stocks and bombers. Coming up quickly will also be the return of the Midwest Sprint Car Series on Aug. 20 with a $3,000 payday to the winner of the sprint feature that should bring some of the top hotshoes around.