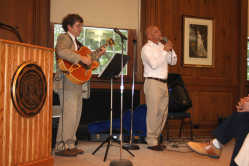 Opening the annual Putnam County Museum gala with a classic, Sandy Williams (left) and Tad Robinson perform a ballad version of the standard "Fly Me to the Moon."
Order this photo

About to kick off an exhibit on Putnam County music, there was perhaps no better choice for the Putnam County Museum's annual gala than a man who's been a part of the local music scene for pretty much his whole life.

Sandy Williams was the speaker at the 10th annual gala Saturday, telling his audience of a musical journey that's taken him from trying to impress a girl in the sixth grade to sharing the stage with the likes of John Mellencamp and Michael Feinstein.

Williams wasn't exactly a traditional keynote speaker. Far from standing at a lectern and speaking, he kept the crowd entertained, opening with a slow ballad version of "Fly Me to the Moon" featuring Tad Robinson's vocals.

He introduced the song by explaining it was originally composed to be performed in this way, not in the sped-up Frank Sinatra version most people know. He also plugged an upcoming performance by Feinstein on PBS on Monday, Aug. 22 at 7:30 p.m. Both Williams and his wife Pam will be part of Feinsteins' performance of "Fly Me to the Moon" on the special.

Following the soulful performance with Robinson, Williams began relating his own musical history, beginning with the day he decided to pick up his mother's acoustic guitar to impress a girl.

"It didn't get the girl, but the guitar stuck," Williams said.

From there, Williams did everything he could to soak up musical knowledge, learning from local musicians like Rod Kersey and Steve Michael (who would be his future Average House Band cohorts) and even carrying equipment into DePauw's Bowman Gym for legendary acts like Ike and Tina Turner or Albert King.

The "stalking" has served Williams well. He now lives in Indianapolis and teaches jazz at DePauw, but his musical journey has led him all over the board, working with rock, jazz, country, R&B and gospel artists, among others.

And rarely was Williams speaking without a faithful guitar slung around his neck. He stayed on his toes, switching between hollow body and solid body models for exactly the sound he needed for whatever point he was making.

The variety of Williams' career and his talk reflect the diversity of Putnam County music featured on the new CD "Putnam County Prime Cuts." The disc kicks off with the soulful blues of Robinson on "Sunday Morning Woman" and then goes into a demo version of "Achy Breaky Heart," which was penned by Greencastle native Don Von Tress.

The disc covers a lot of ground on the remaining 17 tracks, including jazz from the John Wood Combo, gospel from the Brick Chapel Quartet, bluegrass from Bobby Johnston and bar band rock 'n' roll from the Average House Band.

The album, which is available for $20, is being released in conjunction with the museum's Putnam County Notes and Beats music exhibit, set to open Aug. 20.