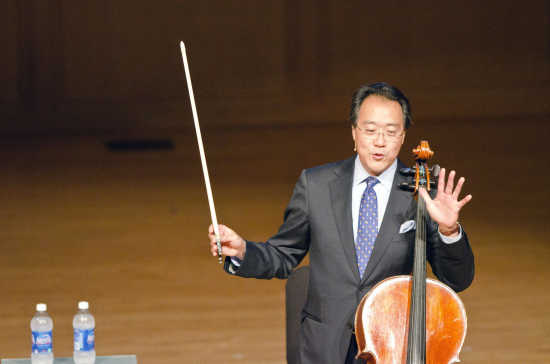 He was introduced by Deborah Rutter, president of The Chicago Symphony Orchestra Association, as "the world's greatest cellist and a great friend to the world." But when Yo-Yo Ma spoke to the people at DePauw University's Kresge Auditorium Thursday night, he revealed himself to be as much of a child and student of life and music as he was when he learned his first piece at the age of 4.

Ma visited the university as part of the DePauw Discourse 2011: Empowering Society Through the Arts program. Throughout Thursday and today, he met with local composers, DePauw students and faculty and many other people in town. Today he will give a sold-out evening concert at the auditorium at 5 p.m., and during his lecture Thursday, he played a few pieces that inspired him, including the prelude to "Suite No. 1" by Johann Sebastian Bach, the first song Ma learned how to play.

According to the writings of Malcolm Gladwell, it takes 10,000 hours of practice to be a pro at something, Ma said. As Ma is now in his 50s, he figured that with 10,000 hours every five years, he has practiced the cello music he is famous for for at least 50,000 hours. And this was how his speech was organized -- broken down into 10,000 sections of time.

"Tell me what goes through your mind," Ma said as he began the suite.

As he considered what music has meant to him throughout the years, he goes back to how he used pattern recognition to learn this piece of music in a few weeks. But the patterns of his life changed when he moved from Paris to New York when he was 5.

"Change is both exhilarating and challenging," Ma said.

At a young age, he met teachers and friends that helped him grow as a musician. They also gave him many opportunities as a young kid, including the opportunity to play for former U.S. presidents Dwight D. Eisenhower and John F. Kennedy. But it was his meeting with Leonard Bernstein at 7 years old he remembered in particular. Bernstein came to his level to talk with him.

"All of us are children," Ma said. He compared the moment to when his close friend Fred Rogers, known as Mr. Rogers, came to that level with his son, which he said showed a level of understanding and a connection.

Throughout the years, as Ma met with the likes of celebrities and Sesame Street characters, his responsibilities and life has changed dramatically. But he still believes music is a powerful tool, and it can be used to help change the world.

"I am a human being first, a musician second, a cellist third," Ma said. "For me music does not exist alone. If a piece of music affects you in some way ... it becomes something living and memorable."

Ma said his life has been lived in pursuit of the answers to two questions, of which the answers have changed a few times over the years: "Who am I and How do I fit in the world?" and "Who did it and why?"

Ma said those who find the answers to those questions can find meaning and purpose in life, and also find out what it means to be human.

"Imagination and empathy are two things that the arts can give to society," Ma said.