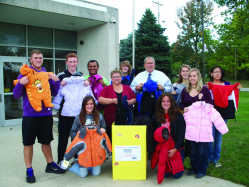 The Putnam County Youth Development Commission is requesting the public's help as it launches its 12th annual Coats for Kids Campaign.

New or gently used heavy winter coats of all sizes -- for little babies all the way through the teen years are needed. The signature yellow boxes can be found all over Putnam County.

Coats that need to be dry-cleaned will not be accepted.

To reach its goal of collecting and distributing more than 850 coats, hats and mittens to Putnam County's children, the Youth Development Commission is asking for your help.

All Putnam County schools are participating in a competition to see which team can collect the greatest number of coats in the campaign that officially kicked off Sept. 23

Elementary schools are working to earn an ice cream party and special visit by the National Night Out Knight, while middle and high schools are competing to see which team (Cloverdale and South Putnam) or (Greencastle and North Putnam) will collect the most coats for distribution and thus, the honor of receiving the "Battle of the Schools" trophy.

Without the ongoing generosity of the community and the support of the businesses and organizations, the Coats for Kids effort would not continue to be possible, organizers stress.

Coats will be laundered and readied for distribution at Harris Hall at the Putnam County Fairgrounds on Saturday, Oct. 29 from 8 a.m. until 3 p.m.

Each child will be assisted in finding the right coat, hat and gloves.

Individuals may contact the Putnam County Youth Development Commission at 653-9342 to make arrangements to pick up a coat if something prevents you from being there in person on Oct. 29.