Kellogg and Sixers strike gold with another grounded effort 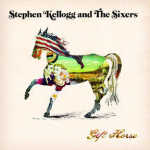 If being a rock star is all about the proverbial sex, drug and rock 'n' roll, then Stephen Kellogg is resoundingly not a rock star.

That's probably OK with the 34-year-old Massachusetts native. He's a father and a husband (Who, in his own words, "Fell in love back in 1993.") who lives with his family in the suburbs.

He also happens to make his living as the frontman of Stephen Kellogg and the Sixers, who released their latest record "Gift Horse" Tuesday on Vanguard Records. It's an album that reflects the values the Sixers' music always has -- life, love and family.

It's evident from the opening track "Gravity" that Kellogg hasn't changed his tune. Rather than curse that pesky force of nature that ties us all down, Kellogg praises it for keeping him grounded.

Oh, Gravity, it's OK in the clouds,

But I love it right here with my feet on the ground.

It's a worldview suited to a 30-something family man. (Like this music critic.) On the other hand the music itself shows that Kellogg and bandmates Kit Karlson, Brian Factor and Sam Getz still know how to have a good time.

Throughout the album Kellogg keeps his songwriting focused on personal stories. "Who We Are, Who We'll Become" is a three-and-a-half minute reflection on a grandfather's advice. "1993" is the story of finding the love of your life, marrying her, having a daughter and even imagining the daughter as an adult.

"Watch You Grow" is a delightful, lighthearted song one can imagine Kellogg singing to his daughter. The record closes with a couple more tributes to family in "Roots and Wings" and "Noelle, Noelle," the latter written for his younger daughter.

"Noelle, Noelle" contains perhaps the best explanation of Kellogg's focus on his family as a songwriter.

Someone asked me just the other day

"How many songs you gonna write about those kids and the one you took for life?"

I just smile and say "As many as it takes."

"Gift Horse" might be too personal of an album for some people, but they likely aren't the people who would have purchased previous Stephen Kellogg and the Sixers albums anyway.

Kellogg wears his heart on his sleeve as a writer and performer, and the results are excellent. He seems to know exactly who he is and what his priorities are.

It's music that's immediately relatable for those of us with the same priorities.