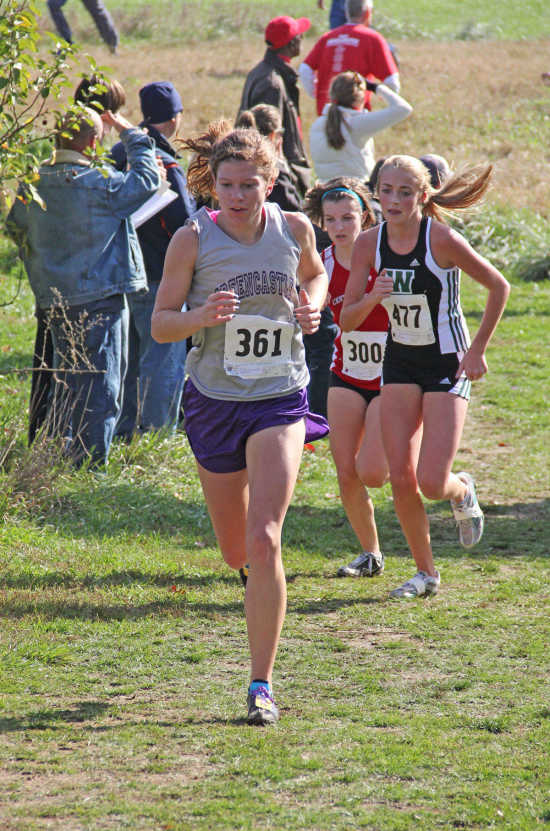 Colleen Weatherford placed 24th at Saturday's Carmel semi-state after posting a time of 19:19.4.

CARMEL -- Colleen Weatherford attacked the course during Saturday's Carmel semi-state cross country meet and improved on her performance from last season by 20 positions to finish 24th on the day. Weatherford posted a time of 19:19.4, but wasn't happy with her finish overall.

"Compared to last year, I know it's so much better, I just know that had I been prepared for it mentally, I could have done so much better. That party really digs on me," she said.

She said while standing at the starting line and hearing the announcement that eight of the top 10 teams were competing got her off her game a little.

Weatherford started strong, staying close to the front of the pack, racing elbow to elbow with some of the fastest runners in the state. GHS head coach Garry Anderson liked her start as well.

"She got a heck of a good start. It was a great start and that's been her trademark all year. We talked about this race several times over the last three days leading up to this. I think she ran a real good race," he said.

Anderson acknowledged the Carmel semi-state had a ton of fast runners racing and he and Weatherford are not used to seeing so many at one time.

"It's so hard when you're dealing with the caliber of kids here," he said. "We race many of these kids, but not in this quantity. We hit maybe two or three of the teams here, two or three teams there, but never like this.

"It's hard to tell somebody 'oh you have to do this' and she's as well prepared as any young kid. She says mentally it was a fact that things didn't quite go 100 percent the way she wanted them to and it threw her off a little bit,"

Although she's experienced a great deal of success throughout her high school career, Weatherford made a statement that should make opponents concerned. She said she finally realized how to race this year and she thinks that will help her going into her senior season of cross country.

"Midway through this season, I realized what I am capable of. That will help me out mentally next year," she said.

With Weatherford missing out on advancing by nine spots, Anderson knows his runner will be back next season and ready to go.

"Colleen, she's a champion from the word go. I'm very proud of her and my gosh, she came so close to getting out of here. It's incredible. She'll be back next year. They're not done with her yet," Anderson said with a smile.