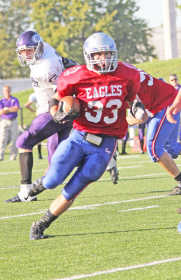 After a successful 2011 football season that saw an upset in the sectional final, one program do a complete 180 and another rededicate itself, representatives from each school and the Banner Graphic have selected their All-Putnam County football team.

Of the 32 players selected, Greencastle and North Putnam led the way with 10 members, with South Putnam adding nine and Cloverdale adding three. 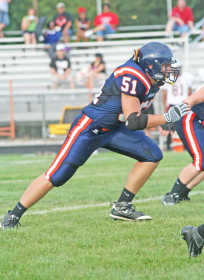 Gibson, also the 2011 Banner Graphic Baseball Player of the Year, was a monster on the field this season. While he did most of his damage on the ground, the senior also was a threat receiving as well as throwing the occasional pass.

He helped lead the Eagles to their first-ever IHSAA Class 2A sectional title and a record of 10-3.

On the ground, Gibson rushed for a school-record 2,092 yards on 277 carries for an impressive 7.55 per carry average. He also recorded 30 touchdowns and averaged 160 yards per game. He set an IHSAA Class 2A Sectional single game record in the sectional final against North Putnam by recording 269 rushing yards.

Of his four pass completions on the year, three went for touchdowns. As a receiver, he gained 576 yards to lead the team and collected seven touchdowns along the way.

In total, Gibson accounted for 40 touchdowns this season for the Eagles.

North Putnam's Bryan had another impressive year for the Cougars. He led the team with 57 solo tackles, 27 assisted tackles and added two sacks. He also had three interceptions and three fumble recoveries. Bryan was named the Player of the Year last season as well.

Bryan anchored a Cougar defense that allowed just 13 points per game en route to a West Central Conference title and a record of 11-1.

On the offensive side of the ball, Everts was the All-County at-large selection due to his efforts passing, rushing and punting for the Cougars. Everts had a nice season under center, passing for 1,489 yards with 20 touchdowns and a 124 yards per game average. He also rushed for 570 yards on 68 carries and nine touchdowns. As a punter, he averaged 31.3 yards per punt this season.

Smerage was North Putnam's leading receiver with 739 yards and 11 touchdowns, while Shorter was second on the team in rushing with 643 yards and nine touchdowns.

Defensively, Spencer was second on the team in solo tackles with 52 and in assisted tackles with 28. He recorded one interception and one fumble recovery.

Lineman Worth was second on the team with eight sacks, along with 34 solo tackles and 21 assisted tackles. Fellow lineman Davis had 28 solo stops, with six sacks and one fumble recovery.

St. Victor-Duncan had 41 tackles from his defensive back position and one interception.

Greencastle's offense this season was a two-headed monster. They were able to go after people both through the air as well as on the ground.

Junior quarterback Gilliam led the team with 1,964 passing yards and 16 touchdowns this season. He averaged 196 passing yards per game.

GHS rusher Lenihan was second in the county in rushing with 1,392 yards on 174 carries and in touchdowns with 22.

Stuckwisch led the team with seven interceptions, three of which he returned for touchdowns. He also had 25 tackles and 19 assisted tackles and two fumble recoveries. Shuee chipped in one interception and 27 solo stops.

Bumgardner tied for second in the state in interceptions with eight. He added 38 solo tackles and 21 assisted tackles at the defensive back spot. Smith led the Eagles in return yardage, collecting 213 kick return yards, with a long return of 49.

Cloverdale is represented by running back Jordan Brinkman, receiver Ethan Atwood and kicker Brian Dale. No stats were provided for Cloverdale.

With so many players putting together impressive years, it was a difficult task for the selection committee to dwindle it down to 32 members.

The class breakdown for this year's squad is 23 seniors, eight juniors and one sophomore.

Offensive Player of the Year

Defensive Player of the Year