Eagles land in championship after win 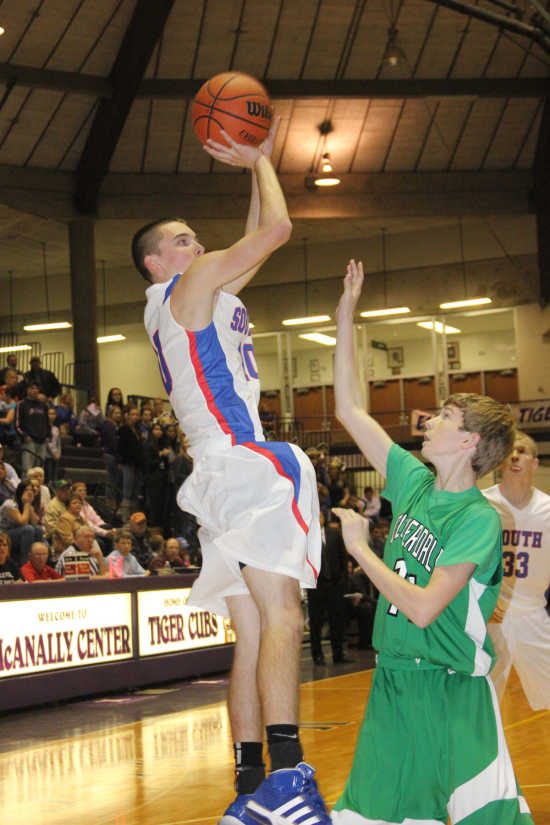 South Putnam senior Seth Hammond gets off two of his game-high 14 points in the opening game of the Putnam County Classic.

South Putnam found itself in foul trouble early, but was able to overcome it and deal Cloverdale a 42-29 loss to earn a spot in the Putnam County Classic final.

The game began with a moment of silence for long-time South Putnam coach and guidance councilor Becky Brothers, who passed away from cancer on Thursday.

It didn't take long, however, for fans to get the place rocking after tipoff.

From the opening tip, Cloverdale held a clear advantage as South Putnam's tendency to foul showed itself quickly. Eagle starting guard Rob Gibson was hit with his second foul less than a minute into the game and Cloverdale was able to take advantage.

The Clovers ran out to a 6-0 lead before the Eagles were able to find their range. A Seth Hammond jumper got the Eagles on the board, but a deuce from Kade Schroer kept Cloverdale out in front 8-2. South Putnam went on a 5-1 run to close out the opening quarter and trailed by two points, 9-7.

South Putnam rode that momentum into the second quarter and outscored the Clovers 13-11 and sent the teams to the locker room knotted up a 20-all. The Eagles had two starters carrying two fouls each into the second half and it didn't take long for them to add even more.

For all the issues the Eagles had with fouls, they were able to put together a nine-point third quarter with Hammond draining a three-pointer and Trey Moore, Justin Bumgardner and Ryan Chestnut chipping in two points each in the quarter.

South Putnam outscored the Clovers 9-3 in the quarter for a three-point advantage entering the fourth quarter.

Cloverdale was only able to connect on one shot in the third quarter and they didn't fare much better in the final stanza. The Clovers hit one shot in the fourth quarter, but were able to hit four free throws. However, they were outscored by South Putnam, who scored 13-6 and came away with a 42-29 victory.

The Eagles were able to fight through its foul problems by getting some nice play out of its bench. The bench provided 11 points for South Putnam and Burgess had the luxury of mixing lineups and not skipping a beat.

"I thought the three kids that came off the bench tonight, (Justin) Bumgardner, (Logan) Pell and Alex Kelly -- what a great pick-me-up," Burgess said. "We talk about it, I don't care who starts, I really don't. I feel like we can go eight or nine deep. We have eight kids that are going to play a lot of minutes. It doesn't really matter who starts.

"We've had three games and I think we've had three starting lineups. Those three came off the bench and gave us a good lift and they needed to. Tomorrow night it will be somebody else maybe. You don't know," he added.

Having already punched his ticket to the championship game, Burgess stared down on the McAnally Center court and watched Greencastle and North Putnam during warm-ups. He acknowledged either team would be a worthy opponent in the battle for the bucket.

"Both of these teams I know, I haven't seen them, but in the past I know Greencastle has a lot of basketball talent. And I've seen all of North Putnam I care to. I know North Putnam has loads of athletes. I recognize a lot of these guys out here and I know they're good athletes and I'm sure they're pretty darn good basketball players too. It ought to be an interesting night for us," Burgess said.

South Putnam was led in scoring by Hammond with 14, with Trey Moore adding 11. Bumgardner scored nine points off the bench, with Sawyer Arnold adding two and Kelly and Ryan Chestnut adding two points each.

South Putnam will face Greencastle in the championship game at 8:15 p.m., while Cloverdale will battle North Putnam in the consolation game at 6:30 p.m.