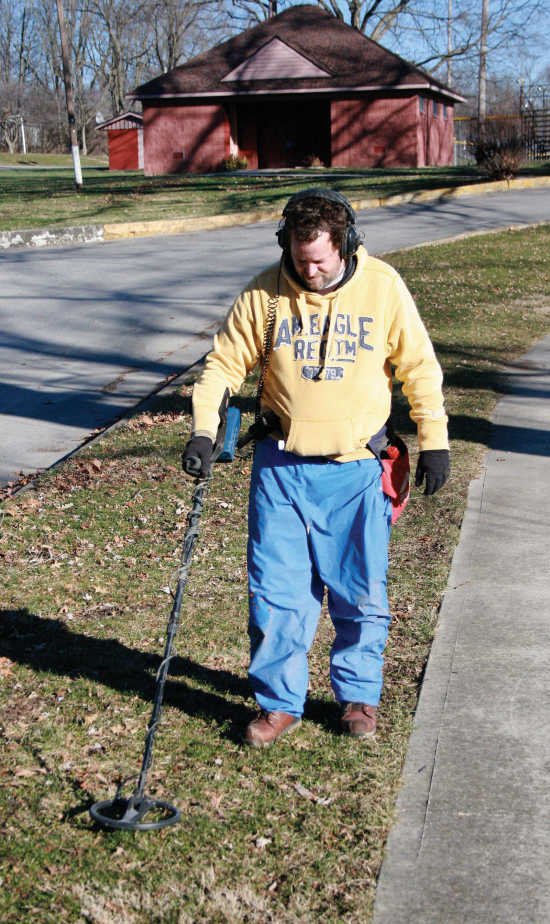 Sweeping over the area along the sidewalk near the main entrance to Greencastle's Robe-Ann Park, Mick Burney uses his trusty metal detector to find coins and other items.

Digging in the dirt has its rewards

There's an old adage that says "gold is where you find it," and that's certainly an apropos sentiment for a guy like Mick Burney.

Gold, silver, bronze or brass, Burney is apt to find it as he runs his trusty metal detector over the grounds at places like Greencastle's Robe-Ann Park.

On Friday afternoon, a sunny, almost 60-degree January day, Burney was out enjoying his hobby, getting some fresh air and pocketing some loose change.

Stopping along the old sidewalk that borders the bandshell area to the north, Burney's metal detector beeped and he dropped to his knees with a handheld detection gadget and hand trowel. Digging about eight inches deep right next to the sidewalk, Burney finally pulled a rusty six-inch piece of wire out of the dirt.

False alarm. But he crumpled the wire and put it in his pocket.

"I even take the junk and throw it away," he smiled.

Two weeks before Christmas, it wasn't junk the Cataract Falls area man was putting in his pocket. On the other side of main Robe-Ann drive, adjacent to another sidewalk, he found an 1869 Indian head penny impeded about 10 inches into the soil.

"It was practically mint condition, although it was tarnished a little from being buried so long," Burney said. "But that coin is probably one of the top four coins collected."

A collector offered him $90 on the spot, but Burney knew it was worth at least twice that to the right person if he chose to wait for the right buyer. "I told him I had never sold a penny for $100 before, so we settled on that."

Burney said he found 40-60 coins that day, despite other area metal-detecting enthusiasts advising him that Robe-Ann Park had been all picked out long ago.

"I never go anywhere with my metal detector that I don't find something," he assured. 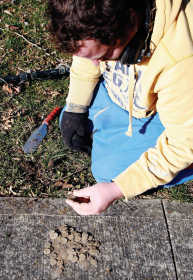 After about a two-hour visit to the park, Mick Burney pauses to examine a few of the coins he found.

As further proof coins can be right there below the surface all around you if you have the right equipment to find them, Burney pulled a handful from the pouch on his belt. In about two hours on Friday, he had found 20-30 pennies and dimes, along with a couple of silver quarters.

But metal-detecting is not exactly a get-rich-quick proposition, Burney cautioned.

At Robe-Ann Park alone, Burney has found a couple of gold rings, a two-pence English coin, bullets with "USGOVT" stamped on the bottom and unused Civil War-era balls (bullets) that were "dropped, not fired," he said.

Some of those finds came his way while the skatepark was under construction, Burney noted.

He says he's been metal detecting about 16 years now and always seeks permission before he goes on sites like the park and fairgrounds, even though they are public property.

"I've found old toys, Matchbox cars from the 1970s, decorative brass bells they call 'crotal bells' (typical of old horse and carriage reins) and even some World War I dogtags.

"But one of my best finds was a copper doorknob with ornamental etching all the way around it. That's what I really enjoy, finding relics like that."

It's also fun, Burney stressed, to be outside enjoying the weather and fresh air while getting a little exercise.

"Everybody has that kid inside them," he said, "that keeps you thinking you're going to find that big treasure. That's what keeps you going."

He typically spends a couple hours a day at it.

And when it pays off, like it did on Friday, Burney can go home and clean up his finds or stop and spend a little dirty money on a snack and a cold drink.

He recalled stopping at the old Cataract General Store for a quick purchase after one successful day of metal detecting.

"I asked the girl, 'Aren't you going to ask me where I got all these coins?' And she said, 'I dunno, the ashtray of your car?'"

Burney laughed. But he gets the last laugh as well.

"Having a few extra coins can come in handy to help pay the bills at the end of the month," he said.