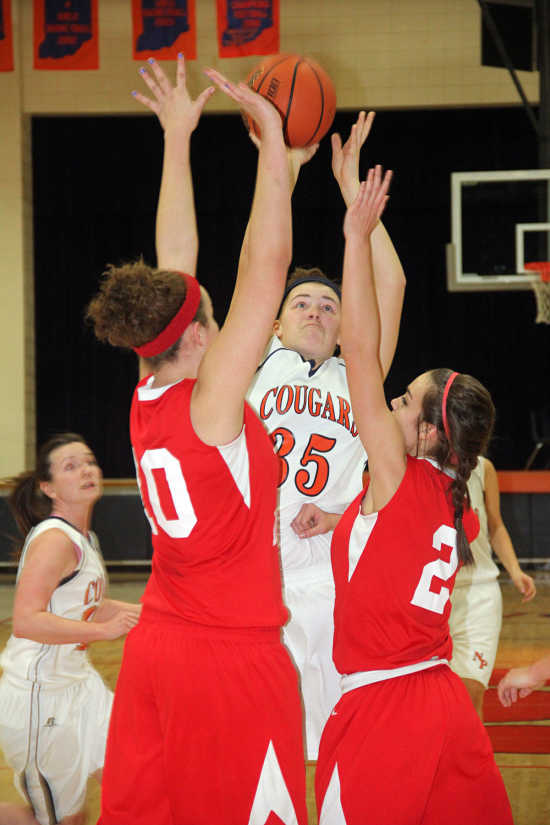 North Putnam's Morgan Robinson (35) goes up between to Southmont defenders during Tuesday's contest.

ROACHDALE -- North Putnam had its chances Tuesday against visiting Southmont in girls' hoop action, but the Cougars encountered an unkind baskets as they struggled from the field and lost a narrow contest to the Mounties 49-41.

Shooting issues have been something the Cougars have dealt with throughout the season and head coach Jim Brothers acknowledged that fact following the game.

"That's been our M.O. for almost all of our games," he said. "We struggled getting the ball to drop through for us. Other teams get some to bank in and we can't get two-footers to go in straight sometimes. When it was all said and done, I was really proud of our girls.

"I thought we played extremely hard. Got down by 10 or 11 late and still made some plays to cut it back and if a couple things had gone different at the end, maybe we would have had a shot at it," he added.

North Putnam trailed from the early point of Tuesday's game, finding itself down a single digit at 11-10 after the first quarter and down a mere six at the break to the Mounties 28-22.

Both team struggled from the field in the third quarter, with Southmont gaining an edge in the quarter 9-6 to take an eight-point lead into the final stanza at 36-28.

In that final stanza, North Putnam did what all coaches hope to see -- convert defense into offense. The Cougars deployed a pressing, trap-style defense that caused the Mounties issues and resulted in the Cougars getting some nice looks and some baskets. However, the Mounties were able to hit enough of their foul shots to keep their edge.

The Cougars continued to play hard through the closing minutes as evident when Maggie Pinney stole the inbounds pass and delivered a pass to Brooke Matthews for an easy bucket. But for all the fight they had left in them, time wasn't on their side and the Cougars fell to Southmont 49-41.

Brothers said he was happy with the results of his team's press down the stretch. He said they decided to foul the Mounties and get their offense going on their missed opportunities. He noted they got their chances, but just weren't able to knock the shots down.

"We're not a great shooting team and so I think we execute pretty well to get pretty good looks and one of these nights hopefully they're all going to go in. It wasn't tonight," he said.

"I was really pleased with how hard our kids played," Brothers said. "I thought every body stepped up and did a really good job. Our bench gave us some valuable minutes tonight. I thought Morgan Robinson came in, she had a root canal done yesterday, I don't know how many rebounds she ended up with, but it seemed like she had a lot of rebounds tonight."

North Putnam will welcome Cloverdale in the first half of a boys'/girls' double-header at 6 p.m.