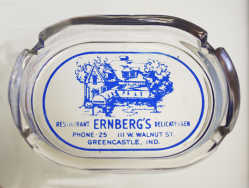 Apparently you don't need a rumpled raincoat or an old, gnawed-on cigar to help solve a mystery.

Not if you're lucky enough to make connections with the right Putnam people.

Last week, a story in the Banner Graphic centered around an old glass ashtray featuring a long-ago image of Ernberg's Restaurant and Delicatessen at 111 W. Walnut St. in Greencastle.

Longtime local auctioneer De Eilar has had that ashtray in his possession for number of years, and when a photo appeared of renovation work on the 111 W. Walnut St. structure (destined to become the office/residence of attorney James Holder) Eilar was moved to share the mystery that has long baffled him.

A week later, not only can we report when Ernberg's existed but who opened it, how they got the ashtray and what happened to the family.

After the ashtray story was published and subsequently included on the Banner Graphic website, a number of interested readers offered informative tips.

We got telephone calls, cards and letters, emails and even a fax. We benefited from a little amateur detective work by the offspring of two longtime local newspapermen. The whole thing even sparked international intrigue when a former resident contacted us from Ottawa, Canada.

But more importantly we heard not only from folks who dined there, but the daughter of the owner and even the local man who suggested the ashtray as a promotional item for the eatery.

We now know that Ernberg's opened for business on March 29, 1952 (thanks to a clipping from the Putnam County Graphic supplied by Anita McEnulty, daughter of the late David Barr). It offered Swedish-American cooking, featuring the then-novel idea of a smorgasbord (more commonly know as buffets these days) on Sundays.

We know it was short-lived (possibly because of the cost of fine dining), closing sometime in 1953, according to Anna Marie (Ernberg) Carney DeGrande, daughter of Julia and Otto Ernberg, who has contacted us numerous times via our website and personal email.

"Mom did have excellent food," she said, echoing others' comments made on the website, "just Greencastle wasn't ready for expensivity (sic)."

Anna Marie, who celebrated her 85th birthday in December and has lived in Tucson the past 26 years, fondly recalls the dessert at Ernberg's.

"Dodie (Hecko), whose husband was a state policeman (Trooper George Hecko), made the pies ... so-o-o-o good."

Another old newspaper ad shows chef George Traeger at work, noting his 20 years of experience with the tag line, "For the best, stop at Ernberg's."

"Mom did have a very good restaurant for a little over a year," Anna Marie noted. "The picture (on the ashtray) isn't quite accurate but the place did have a big front porch and people enjoyed eating out there, just like in the big city. I'm glad people remember it."

Otto Ernberg had the local Chevrolet/Buick dealership that later became Jim Harris Chevrolet in the same facility (and later out on Indianapolis Road where it is the York dealership today).

And it is at the Ernberg car dealership where our stories intersect as lifelong Greencastle resident Johnny Long can vividly detail how the ashtray came to be.

Long says that as a representative of the Kemper Thomas Co., Cincinnati, he regularly called on Otto Ernberg, hoping to sell him promotional items for the car dealership.

Long, who at age 87 is still active in the promotional advertising field after 61 years, remembered running into Mrs. Ernberg at her husband's business. She told him she was starting a restaurant and wondered what promotional items he might suggest.

He even remembers her original order being a gross of those souvenirs. And in short order, she requested another 144 of the ashtrays, which cost 42 cents apiece, Long recalled.

"The selling point of those were that you couldn't deface the imprint," Long said, explaining that the ashtrays were fired at 2,000 degrees. "You could run a sharp key or your knife over it and you'd ruin the sharpness of your knife before you'd ever scratch the image."

The ashtrays were popular, he noted, not only because almost everyone smoked everywhere in 1952 but because of a design that positioned the cigarette at an angle that would make it burn itself out before it burned anything else.

"Yeah, back then we sold a lot of ashtrays because of all the smoking business," Long said. "I don't sell too many of them any more. The VFW has a few that (Mike) Rokicki ordered from me. Most people use them for paperweights these days."

Long is another local resident who fondly remembers the short-lived Ernberg's eatery.

"It not only served delicious food but the interior was gorgeous with all that beautiful woodwork (which was part of the original home, called incidentally, 'the old Evans place' in a Putnam County Graphic story about the restaurant opening)."

So there you have it. The simple act of De Eilar sharing a mini-mystery has brought back fond memories for many.

"Isn't all this grand?!" Anna Marie gushed in summary at all the much-belated attention. "It is nice to know that people remember Mom and how gracious she was."