By TRENT Scott, For the Banner Graphic 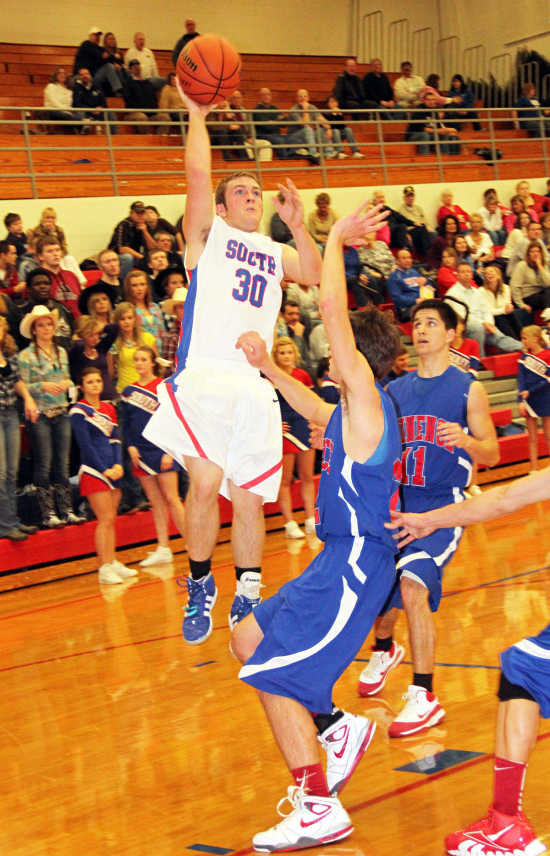 After a disappointing second half against Monrovia Friday night, South Putnam looked to rebound against Tri-West, who lost Friday night also by a point to Speedway.

The game proved to be a hot spot amidst a cold night as the Eagles hung tough with the Bruins and, with a jumper from Seth Hammond, knocked off the visitors 55-53, securing the school's first win over Tri-West since Jan. 22, 2005.

The home side needed some time early to figure out Tri-West's different trap schemes, but knocked down five of the nine shots they were able to get off in taking an 11-6 lead into the second quarter.

The Bruins, who only hit two shots in the opening frame, responded by shooting 50 percent in the second period, including 4-of-7 three-point attempts.

The barrage allowed the Bruins to go on a 15-3 run and take a five-point lead of their own.

The lead soon evaporated as the hosts scored eight of the last 11 points of the half to send the two teams in tied at 27-all.

Much like Friday night, the Eagles soon found themselves playing catch-up as Tri-West tried to apply the knockout blow in the third quarter.

The Bruins scored the opening five points of the quarter before South scored the next five to tie the scores at 32-all. The pattern repeated and the squads were tied again at 36-all.

Tri-West then scored the next seven points during a contentious period of the game in which a technical foul was issued to the South Putnam bench.

With the momentum almost entirely with the visitors, a stretch that covered no more than 10 seconds of the game clock swung the pendulum back in the hosts' favor.

Justin Bumgardner was fouled on the way to the basket and hit the first of two shots before rebounding his second and earning a second trip to the free throw line.

Bumgardner missed both, but again snagged his own rebound, this time finding Trey Moore, who got his own lay-up to fall and was fouled on the way up.

The burst fired up the home crowd and the results were on display during the fourth quarter.

Down 45-40, South Putnam started the period with a three from Sawyer Arnold that was cancelled out by Austin Hendershot a few seconds later.

But that would be the last bucket the Bruins would hit for more than four minutes as the Eagles turned the screw on defense and only committed two turnovers on offense.

South slowly chipped away at the lead, tying the game on two Alex Kelly free throws and took the lead at 49-48 after Arnold knocked down one of two from the line.

Arnold hit two more shots from the line to give the Eagles a 51-48 lead before Earl Chastain knocked down a free throw and Trevor Waite tied the game at 51-51.

Hammond found a way to get an off balance jumper to fall before Chastain tied the game again at 53-all.

Bumgardner missed both free throws on the next trip down, only to watch Chastain miss both free throws as well on the other end. The scramble that followed was whistled dead early by the officials.

After a long discussion, the officials awarded a jump ball with :45 seconds to go, with the possession arrow in the Eagles' favor.

South held the ball until the final 15 seconds before making their move. The ball eventually ended up in the hands of Hammond, who faked one defender before draining an 18-foot jumper with 3.5 seconds left on the clock.

After a flurry of timeouts, Tri-West nearly had the inbound pass stolen, only to get a timeout in with .5 seconds left.

But again, the inbound pass went to white jerseys as the Eagles claimed win number five on the season and a first win in 10 attempts against the Bruins.

South Putnam head coach Troy Burgess said in the end, his squad buckled down on defense and made the plays needed to win.

"After last night, we said that two things we had to do tonight were to handle the ball and take pride in playing defense. I thought we did both of those things tonight," Burgess said.

"We had some turnovers, but we got the ball inside when we needed to. When we can get it in and kick it out, we're pretty good shooters. When we shoot off of one pass we're not as effective."

Burgess didn't want a repeat of what happened the previous night, so the Eagles tried a different approach.

"We were down five last night coming into the second half and Monrovia went on about an 11-2 run, so we talked about that," Burgess said. "We talked about playing the third quarter in two-four minute quarters.

"We said, let's see what we do in the first four minutes and then play the second four. We didn't do that last night and tonight, I thought we did," Burgess added.

"They took pride in playing defense. They did the things that they were taught to do. When the game was on the line, they buckled down, they played hard, and good things are going to happen when they do that."

In the final seconds, Burgess said that his squad's composure was key to sealing the game.

"We got the ball back with about 40 seconds to go. The kids got into our delay, went straight into our set with about 15 seconds left and got the shot we wanted to," Burgess said.

"That was an awful long 3.5 seconds at the end of the game, but our kids kept their composure, did what they were asked and when it was time to make a play, they made it."

South travels to Cloverdale next Friday. Burgess said that the confidence gained has to be carried over.

"If we don't, we'll get beat. This group of kids, they've played other sports and they know it's hard to beat a team twice. Our kids ought to know that," Burgess said.

"Whether it's basketball or football or any sport, they've been beaten and come back to beat the team in the second meeting. It's hard to beat a team twice, especially a team as well-coached as Cloverdale," Burgess added.

"We'd better be ready to play. I don't care how they're playing or what happened the first time. We've got to continue doing the things we do and hopefully it will be a competitive ballgame."

Next game -- South Putnam travels to Cloverdale next Friday.