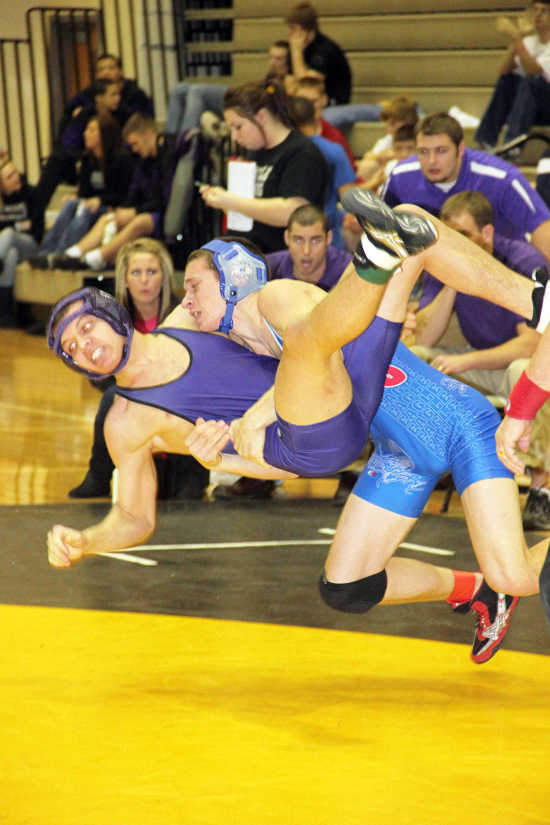 AVON -- Action at the 2012 Avon wrestling sectional was fast and furious Saturday, with the winner being decided by a mere half of a point. Danville edged host Avon 207.5-207 for the win.

Locally, Putnam County has 17 wrestlers advancing to the Mooresville Regional next Saturday, with Greencastle and South Putnam leading the way with seven and six selections, respectively.

South Putnam's Jesse Gardner was the only Putnam County wrestler to stand atop the podium with a first place finish. Gardner defeated Greencastle's Aaron Langdon at 160 pounds by a major decision of 18-4. Gardner punched his card to the finals by pinning North Putnam's Justin Scobee and Avon's Noah Zorniger.

Eagle head coach Josh Hendrickson said he was happy that one of his two seniors was able to garner the county's lone win on the day.

Greencastle has the most wrestlers advancing to next Saturday's regional with seven. They had four wrestlers battling for individual championships, but unfortunately all ended in second place finishes. Head coach Matt McComish would have liked to see an overall win or two, but he's proud of the wrestlers who made it through.

"Seven guys going to regional and if you win, you're going to semi-state, so that's what we have to look at. We have to see who we're going to wrestle and go from there," he added.

In addition to Langdon at 160, Carter Lewis, Ben Hesler and Will Mobley all battled their way into championship matches.

Lewis fell to Brownsburg's Luke Huston in the 170 final by an 8-5 decision. Lewis had his chance after battling back toward the end of the match, but a late move by Huston provided him with enough cushion to get the win.

At 220, Hesler started strong against Brownsburg's Jon Stinnett, but began to fade as the match went on. The two wrestlers were tied at the end of regulation and went into overtime. In the overtime period, Hesler had a few chances, but it was Stinnett who was able to capitalize to get the win.

Mobley battled Avon's Brian Snyder at 285 and held his own early. However, in the second period, Snyder made a move and got Mobley in a position he wasn't able to recover from to win by pin.

Cameron Hinton at 106 and Hunter Smith at 152 placed third on the day and Riley Boswell was fourth at 138.

For South Putnam, Jacob Camacho took on Danville's Brayden Montgomery for the title at 145. Camacho battled hard against Montgomery, but wasn't able to gain the upper hand falling by a 7-3 decision.

Nick Owen lost a narrow match at 113 to Tri-West's Justin Wright. The two grapplers went toe-to-toe in the match, with Wright earning a tough win by a 5-3 decision.

In addition to Gardner, Camacho and Owen, Tanner Thompson at 182, Rudy Harris at 195 and Jacob Williams at 220 all placed third on the day and will advance to the regional.

"It was a good day. It's been a pretty good season. Thankfully most of our team is continuing on. I was proud of the results, plus some of the earlier matches could have gone in our favor but they didn't. But all of those guys rebounded well," Hendrickson said.

Cloverdale's Eldin Hesselgrave will move on to the Mooresville Regional after placing second at 138. Hesselgrave battled Danville's Jordan Judy for the championship and was nipped by a single point, 5-4.

Hesselgrave will be joined at regional by Max Secrest, who placed fourth on the day at 126.

Like Cloverdale, North Putnam will be taking two to the regional in hopes of advancing to semi-state.

Eric Davis was third on the day, defeating Danville's Mike Williams by a 12-1 major decision. He will be joined by Larry Sexton, who finished fourth at 152.

"We got two guys going through," North Putnam head coach Benny Ault said. "Joe Mindiola was another I thought would go through, but got a concussion the first round, so we had to pull him. That was a tough call for a coach, but his health is more important.

"I was hoping to get five to go though, but it's tough competition up here. Very tough competition, so I'm hoping the boys see that and (it) makes them better. We should have a lot of seniors back next year and we'll keep them working hard," he added.

Ault said he was pleasantly surprised by Sexton's performance.

"Larry's been a big surprise for me this year. A senior, never making it to regional and he made it. That was a big goal I had. I got two county champs and I got two different boys going to regional. That's a big plus," he said.

Looking ahead to the regional, all the coaches said it would be keeping things the same and sticking with what got them where they are.

"You don't really know when it's possibly one and done situation in that first round. You have no clue. You just have to go in and wrestle who your wrestling and wrestle the best you possible can," McComish said.

For most of Hendrickson's wrestlers, the Mooresville Regional will be a completely new experience.

"I think it will be exciting," Hendrickson said. "Most of these guys, except for two, this will be their first appearance at regional. They will probably be a little nervous. We're just going to work hard, watch some film and see where we can improve -- really get back to the basics. You just have to get back to the basics."

Although the Cougars have just two moving on to regional, it will be total team effort to get them ready to perform.

"Doing the same thing we're doing," Ault said of the weeklong prep. "Working hard, don't change the practice. Don't take a chance of anybody getting hurt. Just continuing to work hard and get the whole team back there. I told the team, if we have one boy going or two boys going, the whole team is going to be at practice. It's not over until the whole team is done. That will make everybody else better too."

The advancing wrestlers will compete at the Mooresville Regional Saturday beginning at 9 a.m.