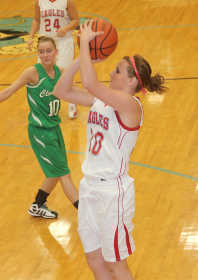 South Putnam's Mattie Varvel came off the bench to score 18 points in the Eagles' win Tuesday.
Order this photo

Cloverdale played tough defense early in the contest and had the game tied up 2-all when Thompson began to heat up. She hit three consecutive three-point field goals to give South Putnam an 11-2 lead and there was no looking back from there.

"Coming in I was a little nervous in the fact the we only shot 13 percent in this gym last time. I'm glad they were able to overcome that kind of mental block in this gym and shoot so well. This can only help us here in the days to come," she said.

Despite facing a deficit of 14 points, the Clovers were right in the ball game. They had balanced scoring across the board, with Bristy Skiles leading the way with six points.

South Putnam's biggest quarter of the night came in the third when it put up 22 points behind a 12-point performance from Thompson in the quarter. The Eagles had to rely on their outside shot as the Cloverdale defense took away their inside threat in Leanna Masters. Fortunately, they were able to knock them down.

Cloverdale continued to play hard and outscored South Putnam 16-15 in the final quarter before falling 68-39. Cloverdale head coach Matthew Langdon said his team improved all season long, even in their final game of the year.

"That's what I told the girls 'we can walk away knowing we didn't really lose that game.' We stayed in it, we would have liked to have been closer at halftime and going into that fourth quarter, but we did some good things. They especially didn't give up," he added.

For Blackman, she saw something she hasn't seen from her team in a long time. The Eagles were able to adapt on the fly throughout the contest and it's an aspect of the game Blackman noted had been lacking in the past few games.

"I saw us able to adjust to the fact that they took Leanna (Masters) away," Blackman said. "They were very scrappy down there and Leanna stayed within herself and was able to get the ball back outside -- and we kept shooting the ball. We found those gaps and learned the three-pointers are maybe not there all the time, but that pull-up jumper, take one shot fake, one step in and that jumper is there.

"We were able to read things as the game progresses and I feel like we've lacked that kind of reading the flow of the game and let the game come to us instead of rush our shot and rush our offense," she added.

Something noticeably absent from the Clovers' game Tuesday was turnovers. Langdon said he was pleased with the way his team handled the South Putnam press and how they didn't commit unforced turnovers on the night.

Cloverdale closes their season with a record of 4-17.