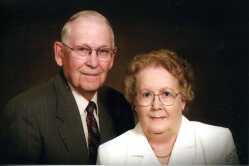 Russell and Mary Alice Harcourt of Fillmore will celebrate their 60th wedding anniversary with an open house on Sunday, May 6 from 1-4 p.m. at the Putnam County Fairgrounds at Harris Hall.

Russell and the former Mary Alice Nichols were married May 3, 1952 at the Fillmore Christian Church. Both were graduates of Fillmore High School and have lived and worked in Putnam County all of their lives.

Russell retired from IBM and Pioneer Seed Company. Mary Alice worked as an LPN at Putnam County Hospital and is a homemaker and quilter.

All friends and family are invited. Cards are welcome, but no gifts, please.