Crash scene 'a mess' in front of Burger King 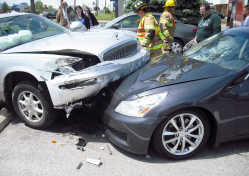 A 2000 Buick Park Avenue, driven by Patricia Clover, Greencastle, rests atop a parked 2007 Infiniti, owned by Scott Hass, Friday afternoon in the parking lot at Burger King on Greencastle's East Side. Four vehicles were damaged in the 1:03 p.m. accident.

Four vehicles, more than $10,000 in property damage and two hours of police investigation and accident clean-up comprised a whopper of an accident in front of Burger King on Greencastle's East Side Friday afternoon.

"It was a mess," Greencastle City Police Officer Ed Wilson told the Banner Graphic. "It looked like one of those Talladega crashes."

While none of the vehicles involved reached speeds anywhere near those NASCAR drivers approach on the famed Alabama speedway, the wreckage strewn along Indianapolis Road and across the Burger King asphalt was a sight to see, Wilson assured.

"It took some investigating to figure it all out," the veteran GPD officer said. "We were there for two hours."

After talking with witnesses and the drivers involved, Wilson and fellow officers Jeff Modlin and Capt. Randy Seipel pieced together what happened about 1 p.m. Friday.

It all started as Patricia Clover, 79, Greencastle, was exiting the Putnam Plaza entrance between Burger King and PNC Bank, driving a 2000 Buick Park Avenue. Simultaneously, Alan Resler, 47, Greencastle, was pulling out of the entrance to the Shoppes of Greencastle on the south side of Indianapolis Road in a 2008 Dodge Ram pickup.

Both drivers were turning to go east on Indianapolis Road when the Clover car struck the Resler truck in the left rear, sending the yellow truck into a spin. Impact also caused the rear passenger-side wheel of the truck to shear off and go bounding down Indianapolis Road, coming to rest in the grass near the People Pathway along the south side of the roadway.

While the truck came to rest facing west against the curb on the north side of the road, Clover's Buick spun back to the north, and when she apparently hit the accelerator pedal instead of the brake, police reported. 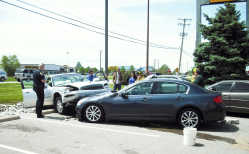 A four car crash occured on Friday, which ended up with one vehicle spinning out and resting on top of another.

The Buick then struck the curb and "was launched into the air," Officer Wilson said, "and it landed in the rocks and riprap in front of Burger King."

The accelerating car and its spinning wheels sprayed those chunks of rock into the parking lot, damaging the windshield and hood of a parked, unoccupied 2002 Pontiac owned by Jackie Gibbens, Brazil.

The careening Buick bounced up off the rocks and came to rest atop the hood of another parked and unoccupied car, Burger King owner Scott Hass's 2007 Infiniti.

"It was the secondary crash that really caused the major damage," Officer Wilson said, admitting it was unusual to see such wreckage result from a relatively low-speed collision.

"(As an officer), you roll up and look at the scene and think, 'How did this happen?'"

As a precautionary measure, Clover was taken to Putnam County Hospital with minor injuries, bleeding slightly from her arm and elbow, Wilson said, noting that she was wearing her seatbelt and the airbag deployed in the collision.

"We were lucky no one was hurt seriously," he said. "If someone had been sitting in one of those cars or walking through the parking lot (when the rocks were flying), it might have been bad."