Cougars explode in fourth for 12-0 romp 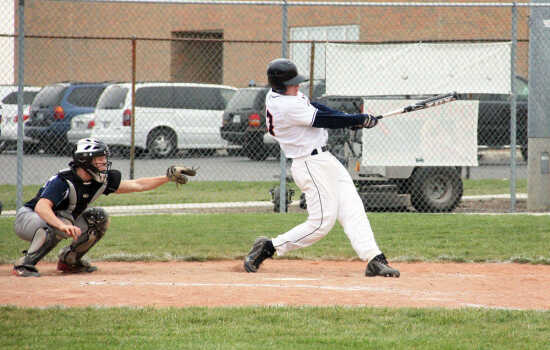 ROACHDALE -- Sometimes it's as easy a making contact. North Putnam connected on 11 hits Friday against Tri-West and put together an eight run fourth inning en route to a 12-0 win over the Bruins in five innings.

North Putnam head coach Norm Fish said the win gave his team a lot of confidence, which was nice to see.

The fourth inning might have been where the Cougars made the most noise, but it wasn't their only opportunity to score a flurry of runs. North Putnam scored one run in the second inning and then put up three runs in the third when Jake Haste missed a grand slam by mere feet.

Haste came to the plate with the bases loaded and sent a shot to left field that slammed into the bottom of the fence to clear the bases. North Putnam loaded the bases later in the inning, but a ground out left the runners stranded.

Things became a little dicey in the fourth inning for the Cougars as Tri-West got its first three batters on base. Haste took command and sat the next three batters down, the final two as strikeouts. North Putnam survived the threat and responded with some timely hitting of its own.

The Cougars were able to figure out Bruins starting pitcher Levi Baumer through the first three innings and even a pitching change in the fourth inning couldn't halt the Cougars.

In the fourth inning, North Putnam collected eight runs on seven hits, including a two RBI double from Austin Day, to take a commanding 12-0 lead into the fifth inning. In the inning, the Bruins had to face 12 North Putnam batters.

North Putnam closed the game out in the fifth inning with Haste striking out a batter and Day throwing a runner out trying to steal second. Kyler Badten recorded the final out with a casual flip to second baseman Shane Beamen.

Haste was 1-for-2 with three RBI, with Day going 2-for-3 with two RBI. Haste also had five strikes and allowed only four hits on the night.

Fish praised Haste's performance after the game and said his pitching staff is getting better each day.

"(It was a) real strong performance by Jake. His last two outings has been real good. Our pitching staff is growing everyday. We have five or six pitchers. Good ones and it's good to see, but we have to keep it going and keep working hard.

The Cougars were aggressive on the bases Friday, which allowed them to continue to score. Fish said it was nice to see his team run the bases so well.

"It's something we've needed to clean up a little bit because we've been a little bit lax sometimes and not aggressive enough," he said. "I saw a lot of good things in that category. Guys taking an extra base after the throw, watching where it was cut at and getting the extra base. That was good. It's the best we've done with that this year."