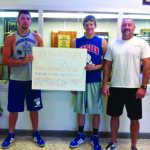 South Putnam football will take on hunger relief this summer and fall. Eagle players (from left) Ryan Chestnut and Justin Bumgardner and coach Troy Burgess are reminding fans that the team will be accepting non-perishable food items at all events this summer and at all home games. These items will be donated to local food shelters.

The South Putnam Quarterback Club and the Eagle football team will be sponsoring a number of fundraising and community outreach events throughout the summer, kicking off with the June 24 Quarterback Club golf outing.

Teams will receive a gift bag full of goodies along with a free lunch.

Bring a canned food item and receive a free drink.

Other upcoming events include:

* July 16: Strongman contest behind the school at 6 p.m. South Putnam football players will compete against each other. Concessions will be available.

* July 22, 27, 28: The SP Quarterback Club will sell concessions at the ATV, Truck, and Tractor pulls at the Fair.

* Aug. 9: Football Kick Off Pitch In Dinner at the high school, 6:30 p.m. All football players K-12, cheerleaders, family members and SPHS football fans are invited to celebrate the beginning of the 2012 football season.

The team is also inviting fans to bring non-perishable food items to all summer events and all home games. These items will be donated to local food shelters.