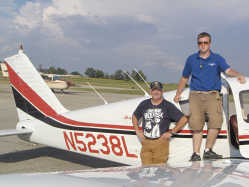 For the last nine years during Airport Appreciation Days the Experimental Aircraft Association (EAA) has held its annual Young Eagles event and this year is no different. EAA Chapter 1374 will again be hosting its Harold Broyles Young Eagle Rally.

The rally is named after one of the chapter's distinguished members and long-time pilot who passed away a few years ago.

The EAA's Young Eagle program is the world's most successful youth oriented aviation program, and this year marks its 20th anniversary.

Its original goal was to fly one million Young Eagles prior to the 100th anniversary of the Wright Brothers' flight. EAA has accomplished this goal and much more.

The EAA and its many chapters have now flown in excess of 1.7 million young people. Locally, EAA Chapter 1374 has flown 1,259 Young Eagles.

"The Young Eagles program is more than just numbers," local coordinator Jack Sutton said. "This is an opportunity for interested youth to take a plane ride and discover a whole new world that can be opened to them. While most people think about airplanes and pilots, aviation is more than that. There are well over three dozen career choices related to aviation.

"Yes, we want to encourage today's youth to become tomorrow's pilots; however, it is more than just that. We want to open their eyes to the possibility of an aviation career; engineer, mechanic, traffic controller, airport administrator, flight attendant, or whatever they may choose." 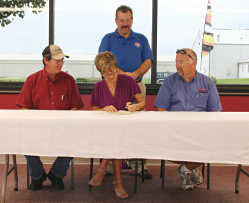 If you have a child ages 8 through 17, bring them to the Putnam County Airport this weekend. Weather permitting EAA Chapter 1374 will again be offering free plane rides to those interested youth. The child must be accompanied for registration purposes with either their parent or legal guardian.

Besides the Young Eagle rides, a number of other events will take place as a part of this year's Airport Appreciation Days.

Opening ceremonies will take place at 9 a.m. on Saturday.

Later that day, the Putnam County Board of Aviation Commissioners will lost the official opening and ribbon cutting of the newly rehabilitated and expanded aircraft parking apron. City, county and state officials will take part in this unveiling at 12:30 p.m.

The annual People Pathways Backroad Bike Tour will also start from the airport on Saturday morning. Registration will take place between 8-10 a.m. at the airport. Riders may choose between a 12-, 36- or 67-mile bike ride.

The Rotary Club of Greencastle will host a pair of events. On Saturday the club will host a car show beginning at 10 a.m. An antique tractor show will follow from noon-4 p.m. on Sunday.

The Dixie Chopper 20th Century Radio Hour is set for Saturday evening. As of Wednesday afternoon, a few tickets remained. Anyone interested may contact Ginger Scott at 655-2333.

A number of events will be ongoing throughout the day on Saturday and Sunday, including airplane ride by Dixie Chopper Air, helicopter rides by Freedom Helicopters, midway attractions by Big Bounce Fun House and breakfast, lunch and dinner at Final Approach Restaurant.