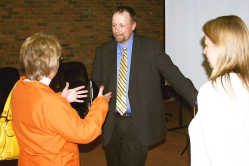 Sponsored by the Greencastle League of Women Voters and the Banner Graphic, the event was designed to educate people on some of the rules and misconceptions surrounding these two laws designed to ensure transparency in public bodies.

Hoage first explained the function of his office, which is to provide advice and assistance concerning Indiana's public access laws.

While media members seem the most obvious beneficiaries of the public access counselor's services, Hoage said media inquiries constitute only about 10 percent of the questions he receives.

Instead, private citizens and public officials ask many of the questions, with officials often asking questions just to make sure they are abiding by the law.

Violations of the state's Open Door Law, Hoage explained, generally fall into one of two categories: failure to provide proper notice of a meeting and improper use of executive sessions.

A public agency is required to post notice of a meeting and provide notice to the media of a meeting at least 48 hours before it is to take place. Notice should be posted at the meeting's location, and the 48 hours may not include weekends or holidays.

Notice of the meeting should be as specific as possible, listing the date, time and location (including address) of the meeting. Hoage said he advises officials to write the notice as if it were for someone who has never been to the location before.

Being specific is also one of the pitfalls of notices of executive sessions. While these sessions are not open to the public, they are subject to the same rules regarding public notice of the meetings.

Instead, a board must cite and quote the portion of Indiana Code under which the meeting in question falls.

If the subject does not meet the standards set forth by law, it may not legally be discussed at such a meeting.

Hoage also explained some of the misconceptions about the Open Door Law, saying the law does not guarantee the public the right to speak at a meeting, has no requirement of public deliberation before a decision is made and that public bodies are not required to provide agendas or even to have meeting agendas.

Regarding the Access to Public Records Act (APRA), Hoage said there are similar standards to the Open Door Law by which public agencies must abide. Not all records are public, but in denying a request, the agency must provide a statutory reason.

Under APRA, records fall into one of three classes. Most obviously, there are public records that should always be granted when requested.

Conversely, there are confidential records that should always be denied when requested. When these record requests are denied, the agency must say why it is doing so.

Many records fall into a class of discretionary exceptions. Among these are police investigatory records. When law enforcement agencies investigate crimes, the records surrounding those crimes are not technically confidential.

The agency is, however, within its legal right to deny access to these records as well.

On either side of a public records request, Hoage said clear communication is key. He advises those requesting records to always do so in writing, as it requires the agency to respond in writing.

Once a request is made, a response must be made within a reasonable amount of time. Even if the request cannot be fulfilled immediately, he said the agency needs to acknowledge the request in a timely manner.