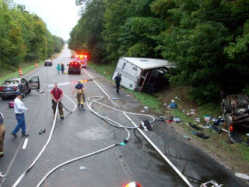 CLOVERDALE -- A Mississippi woman and her three-year-old daughter were killed in a fiery four-vehicle accident Friday evening on Interstate 70 near Cloverdale, Indiana State Police reported.

The victims, identified Saturday as Emma Bronson, 49, and her daughter Zacchia Bronson, were passengers in a car that burst into flames after being struck by a semi tractor-trailer.

Indiana State Police Public information Officer Sgt. Joe Watts said the driver of the car, Michael Bronson, 47, husband of Emma and father of the little girl, was transported to Methodist Hospital at Indianapolis with neck and back injuries

The Bronsons' home is in Pascagoula, Miss.

Preliminary investigation revealed eastbound traffic was stopped for construction when a 2007 Volvo tractor, pulling a box trailer and driven by Jordan Moore 27, Quebec, Canada, failed to stop and struck the rear of a 1999 Chevrolet Silverado pickup driven by William Bertelmann, 60, Burleson, Texas.

The pickup veered to the right and overturned off the south edge of I-70. The tractor-trailer continued on, striking the rear of a 1991 BMW passenger car. The BMW burst into flames and struck the rear of a 2010 Kia driven by Willie Clemmons, 75, Cahokia, Ill.

Moore was ejected from his tractor-trailer and airlifted to Methodist Hospital for treatment of fractures and internal injuries. Bertelmann was transported to Methodist with head pain. Clemmons was not injured.

Motorists at the scene were able to extricate Emma Bronson from the front seat of the BMW and attempted first-aid measures. However, she was pronounced dead at the scene.

Unknown motorists, along with ISP Trooper Yan Dravigne and Cloverdale Police Officer Charlie Hallam, were unable to extricate the toddler from the rear seat. The three-year-old was also pronounced dead at the scene.

As of Saturday evening, no citations had been issued in the accident and no charges had been filed.

Both lanes of I-70 were initially closed following the fatal accident. The eastbound lane remained closed until 10:30 p.m. as police investigated the scene.