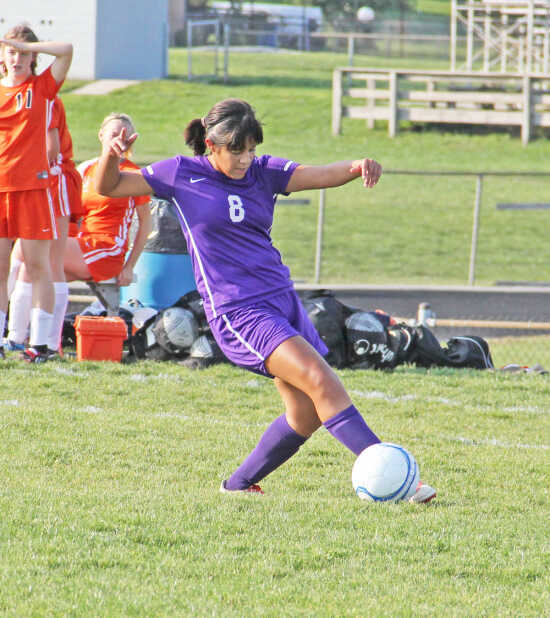 Greencastle junior Maria Gomez takes control of the ball during the first half of Thursday sectional match against North Montgomery.

For the second time this week, a controversial offsides call had an impact on a game at the Greencastle Class A girls' soccer sectional. North Putnam was cited for two questionable offsides calls Tuesday, Thursday it was the host Tiger Cubs that felt the sting.

Greencastle lost to North Montgomery 1-0 Thursday to end its season. The Chargers lone goal came in the first half on a play that Greencastle head coach Jamie Grivas was convinced was an obvious offsides call.

North Montgomery's Hayden Parsons was able to break free of the Greencastle defense and punched a shot past Greencastle freshman keeper Amelia Smith with 2:49 on the clock.

Following the game, Grivas said from her perspective, Parsons was around six feet offsides.

"I've been a ref and I understand you call what you see, but that was just a hard one to swallow," Grivas said.

After going down 1-0 just before the half, Greencastle was aggressive in the second and played much of the half on the Chargers' side of the field. However, the Tiger Cubs were never able to get a clear shot on goal and failed to score.

Greencastle played hard Thursday and Grivas praised the strides her team has made this season.

"This team has improved so much from where they were last year, both on and off the field," Grivas said. "They were a team this year and last year was a little rough. I'm just simply amazed at how great they were as a team and their love for one another and the sport has shown on the field."

Grivas said her team is playing a different kind of soccer than most teams. Instead of playing the dump and chase style most opt for, Greencastle is looking to play more of a finesse style of game.

"We're on the young side and we really focused on changing the game up from dump and chase to playing triangles to using a drop pass, using wall passes, overlapping passes and they're doing it. And we challenged them with a flat-four defense this year," Grivas said.

Thursday's loss marked the end of the high school careers of five seniors, which Grivas gave credit for providing some significant leadership this season.

"The five seniors we had have just been the best leaders this team has seen in years," Grivas said. "They made this season possible, whether they were on the field or off the field, non-stop they made this season fun. They deserve a tremendous shout-out. They're going to be big shoes to fill next year."