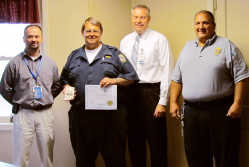 PUTNAMVILLE -- Staff at the Putnamville Correctional Facility (PCF) were recognized in appreciation of their service to the facility and the Indiana Department of Correction.

Wilson, who began his career in the Indiana Department of Correction on Oct. 1, 1977, received the award in recognition of 35 years of service.

"Thirty-five years is quite an accomplishment," PCF Superintendent Stanley Knight praised. "I congratulate Mr. Wilson on his achievement and extend my thanks and appreciation to all Putnamville staff for their efforts."

Assistant Superintendent Tim Phegley announced the recipients of the facility Employee of the Quarter awards.

"Your hard work and dedication has not gone unnoticed," Phegley told staff.