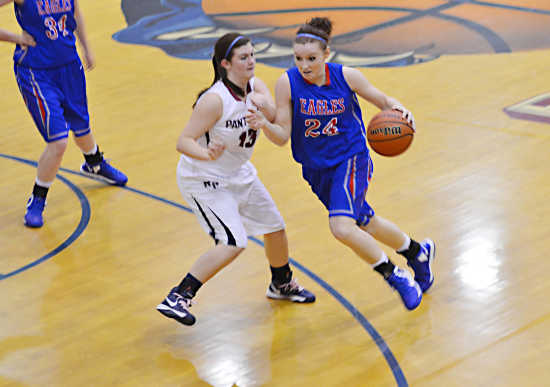 MONTEZUMA -- For a brief moment in the first quarter, South Putnam's girls' basketball squad was leading against Class A No. 6 Riverton Park Tuesday night.

After a 17-0 run, however, the Eagles found themselves in a hole much too deep to dig out of as the Panthers claimed a 68-39 win.

Having lost their second game of the season over the weekend, Riverton Parke looked to bounce back in a big way.

The run that blew the game open came in the opening frame as the hosts' defense nullified most of South Putnam's offensive threat.

After taking a 12-point lead into the second quarter, Riverton Parke continued to score at will as the Eagles could not find the answers in defense against the hosts.

South Putnam finally began to slow down the scoring in the second half as the Eagles' stiffened up defense, committed fewer turnovers and held possession for longer than in the first half.

Though the Eagles matched the Panthers point for point in the fourth quarter, the lead was comfortably safe for the hosts.

A late injury to Kelsey Whitaker only compounded the scoreline as the senior left with a leg injury in the fourth quarter.

Whitaker's injury added to the hard night of basketball, but South Putnam head coach Lindsey Blackman said that squad did not cave.

"It was not the start that we wanted. I felt like we came out a little intimidated, a little flat, a little scared," Blackman said. "We were able to settle in in the second half and battle. They never gave up in this game, which is what we ask from them every time."

The Eagles have a quick turnaround. On Friday they travel to Greencastle, then host the South Putnam Classic, postponed from Dec. 29.

Blackman said that though the Eagles had won the county title earlier this season, beating the Tiger Cubs in the finals, SPHS will have to be locked in early.

"It's a big game for us. We know Greencastle is going to come out fighting and put pressure on us from the beginning until the end," Blackman said. "The big key for us Friday is keeping a level head going into the game. There are a lot of emotions when we play any of the county schools."

"We need to play focused from the beginning. We had to dig our way out of the county championship game," Blackman added.

"We need to start off strong and play our game from the beginning."

Next Game: South Putnam travels to Greencastle Friday at 6:00 p.m.