Life outside General Assembly a new experience for Lawson 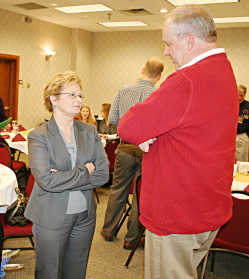 Indiana Secretary of State Connie Lawson speaks to Dave Bohmer following her Wednesday speech to the Greencastle Rotary Club. Lawson told the crowd of "familiar faces" she is still adjusting to her new position after nearly a year, but is enjoying the experience.

Like every year since 1996, Connie Lawson is spending a lot of time at the Indiana Statehouse during the legislative session.

Unlike all the years prior, Lawson has a different view of the action in 2013 in her position as Indiana Secretary of State.

Speaking to the Greencastle Rotary Club Wednesday, the former District 24 State Senator said the General Assembly has a lot on its plate in 2013.

Upon seeing the bills before her former colleagues, "I was glad I wasn't in the Senate," Lawson said with a laugh.

However, not actually being a voting member in the legislative process has been a different experience for Lawson. With a number of bills that would affect her office being considered, she has testified in several committee hearings.

Another big change Lawson continues to adjust to is representing the entire state, as opposed to a district composed of parts of Hendricks and Putnam counties.

Having logged thousands of miles in less than a year in office, the Danville resident said being in nearby Greencastle put her at ease.

"After those 14,000 miles and all 92 counties, it's nice to be back here among familiar faces," Lawson said.

The faces were so familiar, in fact, that Lawson put aside her prepared speech and spoke off the cuff about her department, its responsibilities and the good people who have helped her learn on the job since her March 2012 appointment.

"There were so many great people working there and fortunately most of them are still working there," Lawson said.

When she took over as Secretary of State, with less than two months until the primary election, Lawson felt most comfortable with the department's election division. Her previous time as Hendricks County Clerk and on the senate's elections committee served her well.

After looking through the records, Lawson said she is the first Indiana Secretary of State with prior experience as a clerk, the chief elections official in each county.

"The clerks really do appreciate that I understand what they are going through," Lawson said.

Learning the other functions of the office -- overseeing business services, securities and auto dealers -- has been a bit more of a challenge, but Lawson credited the 65 employees she oversees.

"It's been a lot of fun learning about these other three areas of the Secretary of State's office," she said.

Asked by one Rotarian about the difference in working with governors Mitch Daniels and Mike Pence, Lawson said there are differences in their managerial styles, but spoke of her respect for both men.

She expressed her confidence in Daniels' future as Purdue University president, while saying Pence's background as a legislator brings a different feel to the governor's mansion.

"He (Pence) understands the legislative process and knows that sometimes it takes some time because he's been there," Lawson said.