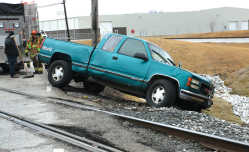 An accident occured Thursday afternoon leaving the driver of a 2007 GMC Sierra truck, Donnie Trumbo, being sent to Putnam County Hospital. The accident occured just after 4 p.m. on Manhattan Road.
Order this photo

The Greencastle Police Department responded to the call at 4:05 p.m.

As the two approached the railroad tracks, just outside of the Phoenix Closures plant, there was a small curve in the road.

"There's a small curve in the road," said Bunten. "Donnie doesn't remember anything except hitting something."

Trumbo left the roadway stopping a few feet before the railroad tracks on the west side of the road.

Trumbo's truck is also said to be totaled. Bunten was not certain about the status of Catt's Toyota at the time. 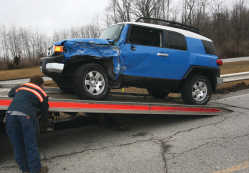 Following the wreck, the driver of the 2007 Toyota FJ Cruiser, Tina Catt, did not sustain any injuries.
Order this photo