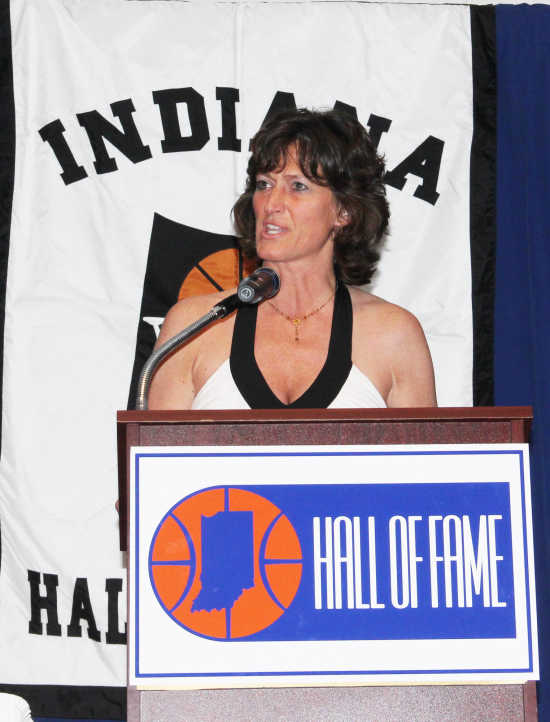 INDIANAPOLIS -- "This was a heck of a year."

As usual, DePauw's Kris Huffman is selling herself short.

DPU's women's basketball coach for the past 20 seasons, Huffman was inducted into the Indiana Basketball Hall of Fame on Saturday, capping off a year in which her team went undefeated, won the national championship and she was named national Coach of the Year by three separate organizations.

Her road to the Indiana Basketball Hall of Fame was paved long before the 2012-13 season; the 34-0 Tigers were just the perfect culmination.

Huffman didn't roll out of the crib with a love for basketball -- that passion took until she was almost two years old.

"I was going to say one, but now I think (she was) two," her father, Gary Huffman, said at Saturday's induction ceremony held at Primo's Banquet Hall in Indianapolis. "I think I put a hoop up in the basement."

It didn't take long after that. Huffman was a gym rat growing up and by the time she started high school, it was clear there was something special about her.

Playing six-on-six ball for the Fort Dodge Dodgers, Huffman was a point-forward.

Girls' high school basketball in Iowa, up until the past two decades, had six players on each team. Guards dribbled up to midcourt, then threw it ahead to forwards to play offense.

The Dodgers drew a packed house for every game, some 2,200 people, cramming in to watch their high-powered offense.

As a junior, Huffman's Dodgers reached the one-class state finals in both basketball and volleyball. Fort Dodge scored just 54 points in the championship-game loss to Vinton.

That wasn't good enough -- not even close -- so Huffman, already the team's hardest worker, upped the ante.

"I don't think a night went by when she wasn't the last one out of the gym," her high school coach Ray Svendson said. "You had to kick her out just to go home."

The Dodgers averaged 96.7 points per game her senior year with a strict directive of "shoot it before you lose it."

Within seven seconds of gaining possession, the guards had pushed the ball up, Huffman called a play and a shot was heading for the rim.

A parent on that team created a video, the Dodger Dream, that Svendson said prophesized what was to come. All the players are profiled and, to the beat of some peppy music, Huffman and her squad are predicted to win a state championship.

Twenty-nine games -- and 29 wins -- later, they did just that. Huffman, a 4.0 student, averaged more than 30 points per game and was named Miss Basketball. Then she headed to Northern Iowa.

Huffman is eighth on the team's Panthers' career scoring list (she was second when she graduated), first in three-point percentage (.483), fifth in free-throw percentage, eighth in assists and seventh in steals. She also has the only triple-double in school history.

As a player, she was inducted into the Iowa Girls High School Athletic Union Hall of Fame. Svendson was elected, too, though he says that was because of Huffman.

It's not a mystery where she gets her modesty.

When her playing career ended, Huffman went to grad school at UNI while she served as an assistant coach at Wartburg College.

Svendson said he didn't see the coaching career coming, but he knew whatever she chose, she would excel.

"I knew she'd be a good one," he said. "She was a great basketball player and she is a great college coach, but by far her best quality is that she's a great person.

After four years as an assistant at Wartburg, Huffman heard about an opening at DePauw. Just a few years out of school, her parents Gary and Joyce Huffman came with her on the interview.

"They took a chance on her," her mother said.

It was time for the Tigers to take a chance. DPU's women's basketball program was 121-200 in its history at that point. In their first 16 years the Tigers had two winning seasons.

Huffman came to DPU before the 1993 season and inherited a team that had gone 7-17 the year before. She was a first-time head coach.

Four years later her first freshman class set a school-record with 22 wins in its senior year.

The Tigers had won 37.7 percent of their games before Huffman arrived.

The Tigers have won conference championships 14 times in the past 20 seasons and they've made the NCAA tournament each of the past 10 seasons.

DPU reached the Final Four for the first time in 2002 and Huffman was named coach of the year. They won a national championship in 2007, finishing 31-3.

Even before this season, with just 19 seasons under her belt, Huffman's resume was legendary. On her way to the team's first game in Milwaukee, she got a call from the Hall of Fame.

"I remember finding out about the Hall of Fame when we were leaving for our very first basketball game this season," she said. "We were on the bus pulling out of town."

Huffman was given the St. Vincent Health Silver Medal Award. The Indiana Basketball Hall of Fame is exclusively based on high school accomplishment, but Huffman was getting in because of what she did at DePauw.

That was a nice way for the Tigers to start their record-setting year.

DePauw went 34-0 on its way to a national championship, the most wins an undefeated team has ever had in Division III women's basketball.

The team was constructed nearly perfectly on every level. The talents, personalities and work ethic of everyone meshed into a seamless module of success.

"To think that we had the year that we did, finishing with the championship at Hope College," Huffman said, "it's amazing. I give credit to the student athletes, coaching staff and to DePauw University. It's just been a very, very special year."

There's not much left to accomplish with the Tigers. Huffman has won every award a coach can win. She's twice been a national champion, she's led a group to an undefeated season and now she's been elected to the Hall of Fame.

Her star has probably grown too big for DePauw, but she hasn't noticed.

The Tigers gave her a start, and she has used that to reach the pinnacle of coaching and to help others along the way.

Volunteer assistant Dana Ferguson played for the Tigers from 1999-2003, then joined the coaching staff. She left for a bit but the pull of DePauw and Huffman brought her back.

"I was recruited out of high school and once I was on campus and meeting her, that was sealing the deal," Ferguson said. "She's obviously a great coach, but she's a more phenomenal person. ... She invited me back (to coach) and I guess the rest is history.

"DePauw is a really hard place to leave because it's such a special place."

Huffman knows there's no way to top this past season.

That's exactly why she wants to try.

"It's always the next season and it's the next group of student-athletes," Huffman said. "How can you put that next team together? That's the fun part. How close can you get to reaching the potential of that team, so that's kind of what drives me."

"This past season was special. 34-0; the senior class and everyone stepping up when Alex (Gasaway got injured); there's so many great memories and story lines for this season.

"It would be hard to top what we've just accomplished. Maybe impossible."

During the NCAA tournament, most of Huffman's peers took the time to call her "the best coach in the country" during post-game press conferences.

That's probably not far off and her induction to the IBHOF helps solidify that.

"Being from Iowa and being inducted to the Indiana Basketball Hall of Fame really is special," Huffman said. "To know how much they value their sports and to be up there with those tremendous athletes; it's kind of mind-blowing.

"It's really special when you're inducted as a coach and you're recognized by your colleagues for what you've been able to do. This one is very special for me, professionally."

The induction was important, but everyone she's coached or been around already knew she was special.

"A lot of things make coach Huffman special," 2013 national champion point guard Kate Walker said. "Usually a player and a coach can butt heads, but I don't think we really ever have because she's so good at what she does and she presents it well.

Walker, a senior, was a leader for this year's team. She said even before the Hall of Fame, she can look back at her career knowing she had a once-in-a-lifetime opportunity to play for Huffman.

"I always knew she was a special coach," Walker said. "Now everyone else recognized it."