PUTNAMVILLE -- A 31-year-old Marion County woman was arrested Sunday at the Putnamville Correctional Facility (PCF) for allegedly trafficking a controlled substance to an offender.

Indianapolis resident Jakkia Baker was arrested at the prison on felony charges of conspiracy to traffic, trafficking with an Inmate and possession of a controlled substance. 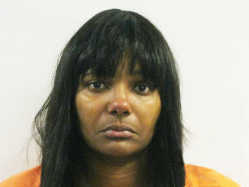 Her arrest came following a visit where she was observed attempting to retrieve a hidden article or articles from her person during a visit with her 36-year-old husband, offender Dujuan Baker.

Upon detection, PCF supervisory staff members were notified and immediately searched Dujuan Baker. A search of the inmate resulted in the retrieval of 75 strips of Suboxene, a controlled substance.

He was subsequently placed in administrative segregation where he could face additional charges pending the outcome of an investigation.

Dujuan Baker is currently serving a sentence for robbery, a Class B felony, and dealing cocaine, a Class A felony, with a projected release date of Aug. 2, 2016.

Jakkia Baker was intercepted prior to leaving the facility, PCF officials said.

Charged with the three felony counts, she was then transported to the Putnam County Jail by Correctional Police Officer Brad Alspaugh.

"Despite our efforts to warn visitors that criminal behavior in our facility will not be tolerated, a small percent continue to enter our facility with the intent of breaking the law," PCF Supt. Stanley Knight said following the latest arrest for trafficking.

"I reiterate, we will remain diligent in the detection and prosecution of all involved in conspiring and/or attempting to introduce contraband into the facility."