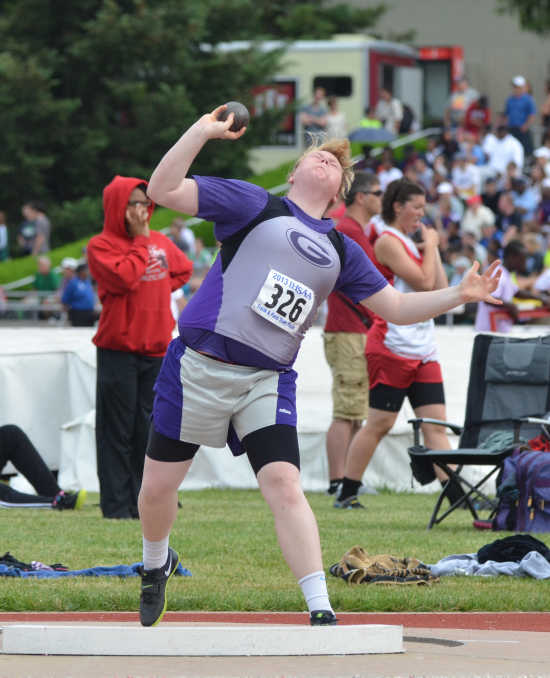 Greencastle sophomore Jessica Lenihan puts all her energy behind her toss during the shot put event at Saturday's state finals. (Banner Graphic/TRENT SCOTT)

BLOOMINGTON -- It may have been teammate Colleen Weatherford's fourth trip to the IHSAA Girls' State Track and Field Finals, but for once, she had company in Bloomington.

Jessica Lenihan made her first appearance at the Robert C. Haugh Track and Field Complex Saturday in the shot put event.

The Greencastle sophomore was one of only two members of her class in the event and she finished in 24th place, one spot behind North Putnam's Sam Lucas and two spots back of fellow sectional and regional competitor Alissa Turpin of Terre Haute North.

Lenihan said that while the throws were not the best, being at the state finals was an overall good experience.

"I did OK," Lenihan said. "I could have done better but it was awesome being here. It was a fun experience and I had a good time.

"It was fun talking with Sam (Lucas) during the first part of the meet. It relaxed our nerves before we threw.

"We talked about the other throwers afterwards and it was a fun experience."

Greencastle head coach Garry Anderson said that just getting to the state meet was a major accomplishment for Lenihan.

"It might seem somewhat terrifying for a sophomore, being thrown out there with all the veterans and Jessica might have seen it as an uphill battle to do well against those girls," Anderson said. "But the thrill of being here and competing like this, knowing you're one of the top 27 in the state, I thought she did reasonably well.

"I knew she'd be tight mentally as well as physically because it was her first time here," he added. "I'm proud of her, though, because she's come a long way since her freshman year. To be one of two sophomores here is fantastic."

Anderson said that making it back to the state meet would be a process that began the next day.

"She'll need to be stronger," Anderson said. "That's paramount. We'll have to fine-tune her technique. She does parts of the throw too much to be under control. Those are things that come with age and experience.

"She does have to become stronger and she and coach (David) Stephens will work out in the summer and hopefully lift in the fall.

"Hopefully, after basketball season, we can get her up and going again," Anderson added. "We've got some goals we've talked about and that are within reach.

Weatherford was excited for Lenihan's performance at the state meet and left encouraging words for her fellow Tiger Cub.

"It feels great to share (the experience) with Jessica," Weatherford said. "There's not another hardworking teammate that I'd rather see make this event. I wish her the best luck in her next two years."

As for Lenihan, she and the coaches have already mapped out what a return trip might look like.

"My goal to return here is to get up in the 42-43 foot range and aim for the top four or five places," Lenihan said. "I feel like I've made a huge stride this year. We did harder work in the weight room and that helped a lot.

"It's cool watching the best throwers in the state and it's amazing to be here. It's hard to find words. It's awesome to see the things here and be one of the two from Greencastle to make it here."