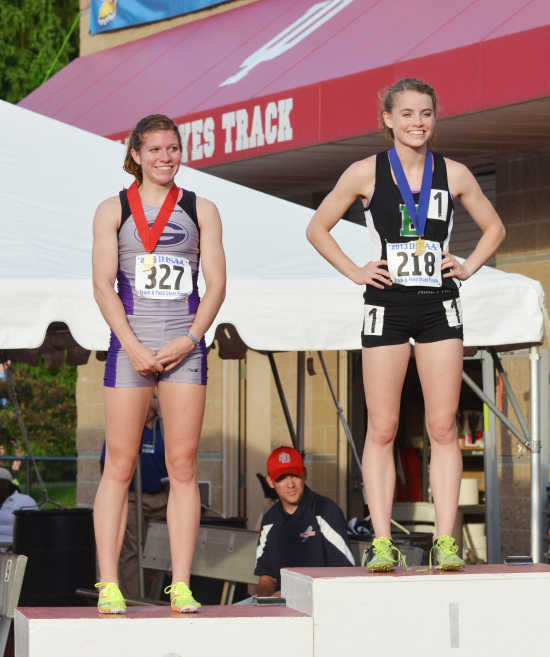 Weatherford, as she has done for the last four years at Greencastle, took the lead in the 800-meter run at the IHSAA Girls' State Track and Field Finals.

When she crossed the finish line, the Tiger Cub had broken the previous state record.

The only thing wrong with the script was that Weatherford finished second.

Eastern (Greentown) senior Brittany Neeley won the event with a time of 2:07.91, outstripping Weatherford with 250 meters to go in the race.

It was a place order that was not unusual to Weatherford, who had finished behind either Brittany or twin sister Bethany Neeley at every state final all four years.

When asked about the race, Weatherford said that she had run in the way she envisioned it.

"The first lap felt really good," Weatherford said. "Everything went according to plan. I started the first 200 meters in about 30 seconds, came through the line at 62 seconds, which was the goal all along.

"I felt like that was very good to start off with. Before she caught up to me, I could hear her footsteps approaching, so it was more of, 'OK, I've got to start kicking and accelerating gradually.'

"Once she started to pass me, I was thinking, 'OK, you've got to hang in there. Get through the curve and you can give it that last little kick to get her,'" Weatherford added.

"My strides were getting long so I had to correct that. She was looking back, but I guess I didn't have that last little bit of sprint today."

"She and I had talked about it and she went out and raced the kind of race she felt comfortable with," Anderson said. "My gosh, she got second place by breaking the state record.

"We talked about it and thought that to be in the top layer, she'd have to be below 2:10 and she did exactly that.

"She raced a fine race," Anderson added. "She broke the state record but it took more than that to win it. A great girl won it and a great girl finished in second." 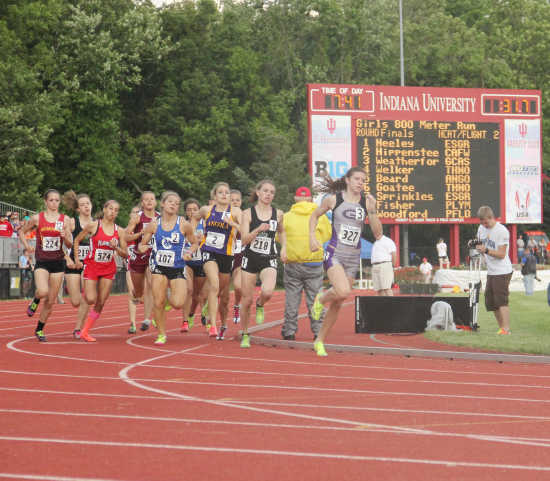 Anderson said that Weatherford showed for four years she had the drive and the work ethic to be at the state championship every year.

"She has developed very well," Anderson said. "She loves to lift weights. She loves competition. She hates to lose. She sometimes pushes herself too far, but that's Colleen.

"She's a go-getter and hopefully in the next few years there'll be more good things to come from her as she develops into a collegiate runner.

Anderson noted that the team returning next year knows what kind of work they would need to put in.

"A lot of kids have watched her out on the field, on the track and they know how hard she pushes herself," Anderson said. "They know that if they want to become that good or close to it, they know it's going to take hard, hard work.

"She leaves a legacy of four state finals, placing three years in a row and that's going to be hard to beat.

"We could put her in several different races," Anderson added. "She could have done well in any race we put her in. We lose somebody with a lot of capabilities.

"You can't replace somebody like that. It takes a whole team effort to replace what she's given us for four years."

Weatherford, who will be attending Butler University this fall, will compete one final time in the high school ranks at the Midwest Meet of Champions at Fort Wayne Northrop High School on June 15.

The previous state record, set by Park Tudor's Abbey Farley when Weatherford was both a freshman and a sophomore, was 2:08.91.

The Butler coaching staff was impressed with what they had seen and Weatherford said they already have ideas line up for her.

"The coaches said I'll do some 800s but also move around in events," Weatherford said. "It will be a matter of finding my little niche now."

Reflecting on her final meet for the Tiger Cubs, Weatherford said that she used the wins of older brother Andy Weatherford in the 1600-meter run in 2005 and 2006 as inspiration over her four years.

"Ever since (Andy) ran and won the 1600 those two years, I've just wanted to measure up to that," Weatherford said. "It's a little joke between us about those two wins and I wanted to go for one in the 800.

"Freshman year, I was just ecstatic to make the meet. It was a big step coming in here on callbacks and then making it on my own the next year.

"Every year, my goal was to move up in the medal count. I was successful in doing that, even if I missed a championship. That still means a lot."