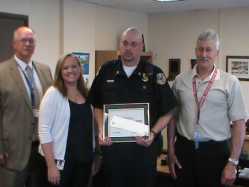 The Indiana Committee for ESGR announced recently that Captain Jackson of the Plainfield Correctional Facility was honored with a "Patriot" award in recognition of extraordinary support of military employees who serve in the Indiana National Guard.

"The ESGR Patriot Award was created by ESGR to publicly recognize American Employers who provide extraordinary patriotic support and cooperation to their employees, who like the citizen warriors before them, have answered their nation's call to serve," said Steve Lynch, ESGR State Chair. "Supportive employers are critical to maintaining the strength and readiness of the nation's National Guard and Reserve units."

Plainfield Correctional Facility joins with thousands of American employers who have reviewed and amended their current human resources policies to ensure compliance with the Uniformed Services Employment and Reemployment Rights Act Law. A "Patriot Award" recognizes an employer for his or her support of National Guard and Reserve members. Any service member can nominate their employer for a "Patriot Award" at http://www.esgr.org.

Employer Support of the Guard and Reserve is a Department of Defense agency established in 1972. The mission of ESGR is to gain and maintain active support from all public and private employers for the men and women of the National Guard and Reserve. ESGR volunteers provide free education, consultation, and if necessary mediation for employers of Guard and Reserve employees.

As the 1.3 million members of the National Guard and Reserve continue to perform an increasing number of unique missions with America's borders and beyond, ESGR will continue to be the resource for the employers of citizen warriors. ESGR provides education, consultation and if necessary mediation for employers of Guard and Reserve employees. More information about ESGR Employer Outreach Programs and volunteer opportunities is available at www.esgr.mil or by calling Indiana ESGR at 317-247-3548.