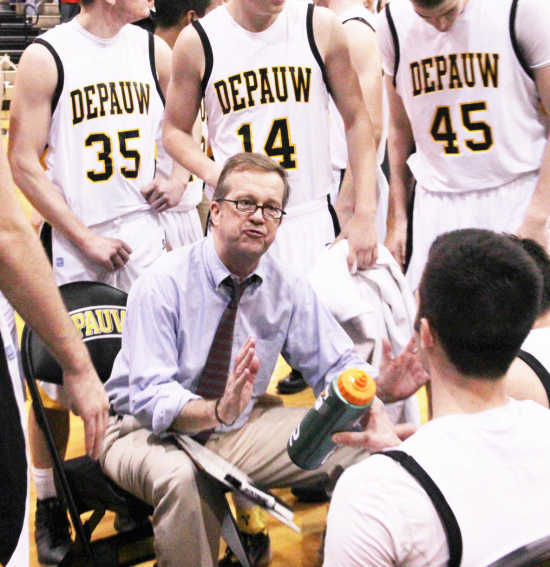 DePauw men's basketball coach Bill Fenlon composes his team during a timeout in a game during the 2012-13 season. (Banner Graphic/GRANT WIEMAN)
Order this photo

When a coach stays in one job long enough, it means he's either found success and that he's had some help along the way.

As he begins his 21st year at DePauw, Bill Fenlon has had plenty of both. Fenlon is the school's all-time leader in career wins (340) and games coached (525).

"Always when you're hiring people, you like to hire people that are aspirational," Fenlon said. "If you're not aspiring to move up or move on, you're probably not going to do very well at any business."

Brad Stevens, a '99 DePauw graduate, is the biggest name. Stevens was recently named head coach of the NBA's Boston Celtics. He was previously the head coach for Butler University and led the Bulldogs to the NCAA Division I Men's National Championship game twice in his six seasons.

Moving on to the next level was seemingly inevitable for the Tigers' alumnus.

Having players go on to become coaches is common at many other schools, but at DePauw it's been an exception. Aside from Stevens, Fenlon's protégés have mainly been assistant coaches on the way up.

"I'm straining a little bit to think of another guy in the last 10 or 15 years and really pursued it." Fenlon said. "The deal for us is we've had guys come here as assistants and had some good experience and moved on to some other opportunities as a result of that."

As Stevens' star has risen, so has the interest of Fenlon's other players. The connection could be unrelated, but many more former Tigers have moved on to coaching in recent years. His current staff includes Brian Oilar and Sean Haseley, two DPU grads.

"Most of our guys are really too smart to go into coaching, and Stevens really was, too," Fenlon said. "Especially at a place like DePauw, you get a chance to see what your other possibilities are.

Another former DePauw player, Brad Brownell, is now head coach of the Clemson men's basketball team. Brownell graduated in 1991, prior to the start of Fenlon's tenure.

While he hasn't actively pursued players who may go on to become coaches, Fenlon has filled his team with guys who love basketball. Having a few go into coaching is unavoidable, even if it is a difficult path.

"When we're recruiting guys we're looking for good players. With 17-year-old kids, trying to project what they're going to be doing 10 years down the road is probably a little bit of folly," he said. "A lot of times you'll talk to kids and they will indicate an interest in coaching or teaching or whatever, and I think a lot of that is, so far, for the first 17 years, they've been going to school and playing ball.

"It's really all they know, so it's kind of their comfort zone. ... I think college really should be, for a student-athlete, an opportunity to figure out how good you can become with your sport, but also, from an academic side and social side, it's an opportunity to see what else you can be."

While Fenlon acknowledged that the success of Stevens and his former assistants can't hurt in recruiting, he insists it doesn't take much to sell a kid on DePauw. Especially the kids he recruits.

"When you have something happen that is as visible as this, it certainly can't hurt, but I don't know that it's the transitive property. ... I think what does follow is that if you come to a place like this, and you have a great experience, and you're a smart enough guy, you're going to opportunities to do a lot of different things."