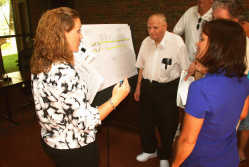 A construction project designed to upgrade the Washington Street area between downtown and Bloomington Street is under way in Greencastle.

New, wider sidewalks and 12 new decorative streetlights and improved drainage are part of an effort to give Washington Street "more of a neighborhood feeling rather than a truck route," project engineer Leah M. Cosgrove of CECon Civil Engineering Consultants told more than a dozen local residents who turned out Thursday evening for a City Hall meeting on the streetscape project.

The general contractor, OLCO of Batesville, had already started work earlier Thursday on the streetscape project, a portion of the city's $19 million Stellar Grant package. Initial efforts have included total removal of the sidewalk along the south side of Washington Street between Vine Street and College Avenue.

As part of that, a large tree precariously in the right-of-way at the southwest corner of Washington and College has been removed.

Meanwhile, area resident Jim McMillan came to the meeting to make certain a similar fate doesn't befall a towering large ash tree that provides shade and a degree of ambiance to his 130-year-old home at 307 E. Washington St. (the northwest corner of Locust and Washington).

"I've got a 100-year-old tree I don't want taken out, that's why I'm here," McMillan pleaded to Cosgrove and engineer Cassie Reiter of Crawford, Murphy & Tilly Inc., who did the preliminary engineering on the streetscapes.

The engineers did not promise McMillan anything other than to review the situation, and after the meeting he seemed content to have voiced his concern.

"I'm going to pray on it," McMillan told the Banner Graphic. "God works in mysterious ways, you know."

(However, since that meeting McMillan's tree was found to be infested and must be taken down.)

There seems to be little mystery, however, about how OCLO will work. Workmen will be on the job from 6 a.m. to 6 p.m. Monday, Tuesday and Wednesday and then 6 a.m. until 2 p.m. Thursday before the out-of-town crew takes a long weekend at home with families, Cosgrove explained. 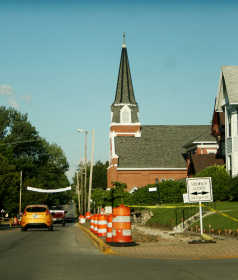 Work on the streetscape project along Washington Street between Vine and Bloomington streets is under way and is expected to be finished by Sept. 20.

No actual pavement repairs are included in the project, which is due for completion by Sept. 20.

City engineer Garth Hughes explained that some businesses, including HBG Insurance and the professional offices a block east of the square, will likely find the work "disruptive" for a week's time or more when the sidewalk is removed.

The crew will do its best, he said, to provide temporary entry to front doors and handicapped access to buildings that do not have such access from the rear.

A big feature of the streetscape work, Cosgrove explained, will be "bump-outs" at most intersections. That alteration to the streetscape, she said, will help pedestrians cross Washington Street (U.S. 231) more easily and "hopefully slow traffic a little," she said.

Such bump-outs, Hughes explained, are designed to have a calming effect on traffic and at the same time can protect parked vehicles by providing a buffer to separate them from the cars and trucks that go past.

However, one parking space will be lost at each end of the bump-outs where parking is allowed, Reiter said, explaining that technically, there is supposed to be no parking within 30 feet of a corner on an INDOT route like U.S. 231 anyway.

Despite the bump-outs to be added alongside the south side of every Washington Street intersection from Vine to Locust and on the north side at Vine, College, Spring and Locust, the design will still allow two "big trucks" to safely maneuver past each other and enable fire trucks to execute every necessary turn.

Those spots, of course, would be recovered by the 146-space parking garage to be built in the block bounded by Indiana, Walnut and Jackson streets). Rebidding on that estimated $3.4 million project is set for opening on Thursday.

The overall Greencastle streetscape project is also set to include utility relocation work in the alley between Indiana and Vine streets, north of the Vine Street parking lot. The rest of the work in that alley, however, is now ticketed for 2014.

The revised 2014 segment of the streetscape schedule includes:

-- Indiana Street (from Washington to Seminary). Project will involve full reconstruction with all new pavement, sidewalks, drainage improvements, lighting, trees and green space. It got pushed back from 2013 to accommodate necessary utility work within the street. Also included will be pavement and drainage improvements to the alley between Indiana and Vine streets.

-- Vine Street (from Washington to Seminary). The project will include pavement reconstruction, sidewalks, lighting, trees and green space.