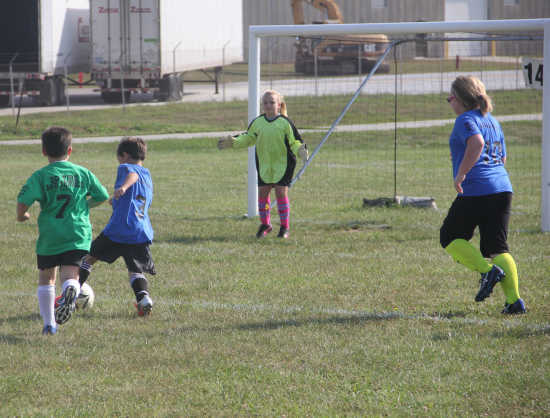 In a U10 game during Saturday's opening day of the PCYSA fall season, Zane Huber (3) and teammate Rain Minaltz try to get a shot past goalie Faith Will while Ryan Deaton (7) defends. (Banner Graphic/GRANT WIEMAN)

With the help of kids, parents and a team of volunteers, the Putnam County Youth Soccer Association is a growing organization that serves more than 350 athletes from ages three to 14.

The PCYSA kicked off its fall season on Saturday at Big Walnut, its home base for several years. In addition to celebrating the first games of the year the PCYSA is also participating in Youth Soccer Month in America.

"It's just trying to bring awareness to what soccer is and trying to get kids involved in playing," PCYSA president Roger Dortch-Doan said. "We're just trying to give them the best experience that we can."

PCYSA supports 30 youth teams, six travel teams and is the only organized initiative of its kind between Indianapolis and Terre Haute.

The group is run by a team of volunteers, which includes a nine-member board and more than 50 coaches.

"We're just out here because we love soccer and we love helping out with the kids," Dortch-Doan said. "more."

The coaches range from parents to community members including a large group of DePauw students. The travel team coaches are also all E Licensed with the state organization.

While coaches are among the most prominent volunteer positions, the PCYSA also has numerous people working every weekend in concessions, grounds keeping and management.

While many of the volunteers are parents, other community members are actively involved. DePauw students in particular have made an impact. Varsity soccer players, fraternity and sorority members coach, set up the field and serve on the PCYSA board.

The priority of everyone is to ensure the kids have fun, make new friends and stay active. Kids from all different schools and towns are put together on the same team, which plays together for a few months, then reshuffled the next season.

This allows the kids to make new friends they wouldn't have otherwise met, and keeps the games competitive. Organizers try to make teams with balanced skill-levels.

PCYSA has four different age-groups: U6, U8, U10 and U14, with all the teams being co-ed. In the U6 and U8 leagues there are no goalkeepers so the kids can get used to passing, scoring and playing everywhere on the field.

The young athletes aren't the only kids who can benefit from the PCYSA. Many of the referees are either current or former PCYSA athletes, including several who play on local high school teams.

Being a referee can help the kids earn money, but it also reinforces their learning of the rules of their sport.

All of the youth teams are sponsored by local companies.

To learn more about PCYSA or to volunteer, visit PCYSA.com.

"Soccer is the most popular game in the world," Dortch-Doan said. "To get the kids out here and moving and interacting with each other and getting all these experiences are good things.

"The more we can do that, the better off they'll be."