Personnel from Kenny's Towing pull a GMC Sierra from the rock wall it struck on the north side of U.S. 36 just west of Big Walnut Creek Thursday morning. Joshua Finley of Greencastle was eastbound in the pickup pulling a trailer with a riding lawnmower at the time of the crash. The mower was thrown from the trailer, landing several feet in front of the truck. Finley and passenger Randall Earl II were taken to nearby hospitals.

BAINBRIDGE -- Two men were taken to nearby hospitals Thursday morning after their pickup truck struck a rock wall east of Bainbridge.

The Putnam County Sheriff's Department investigation indicates that the GMC Sierra pickup, which was pulling a trailer, was eastbound on U.S. 36 exiting a right-hand curve on the downhill approach to the crossing of Big Walnut Creek.

Deputy Josh Boller said the driver, 26-year-old Joshua Finley of Greencastle, apparently lost control of the truck and began to cross into the westbound lanes. 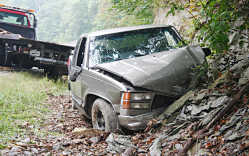 Marks on the road and the guardrail indicate that Finley steered back into the eastbound lane and into the guardrail. This impact caused the truck to shoot back across all lanes of traffic, leaving the roadway on the north side and crashing head-on into a rock wall.

Most of the impact was to the front driver's side of the truck, and Finley sustained the most severe injuries. He complained of back pain and could not feel one of his legs.

Both Finley and his passenger, Randall Earl II, 24, Indianapolis, had injuries and swelling to their faces. Neither man was wearing a safety belt.

Operation Life transported Finley to Groveland, the nearest spot where a helicopter could land. An Air Evac helicopter then took him to Methodist Hospital in Indianapolis.

Upon impact, a riding lawnmower was thrown from the trailer, overturning and rolling to several feet in front of the truck, where it came to rest on its wheels.

A push mower remained in the trailer but also sustained damage.

Kenny's Towing retrieved the truck, trailer and mower from the scene.

Boller said the wet road from overnight and morning rains was a factor in the accident, combined with pulling a trailer on a downhill curve.

The deputy said there was not enough information to indicate whether or not speed was an additional contributor.