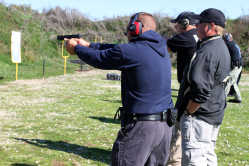 Banner Graphic/LAUREN BOUCHER and JOYCE ORLANDO
The Guardian Firearms Academy, owned by Jerrod Baugh, offers a variety of self-defense classes for the public as well as qualification training for local police departments. The Roachdale Police Department recently participated in training over the weekend at the Jim Baugh Firearms Range. Participants included Jason Woodall (above, left).

That's the motto of the Guardian Firearms Academy, owned by Jerrod Baugh, which offers personalized self-defense training with firearms.

The idea to have a range that offered civilian classes came from Jerrod's late father, Jim, who started the Captain Jim Baugh Firearms Range in Greencastle.

"My dad was the firearms instructor for the Putnam County Sheriff's Department. He had the range and building built on the county ground there for the PCSD," Jerrod explained. "He had aspirations to have civilian classes out here."

Beginning in 2000, both Jerrod and his father offered several self-defense classes for women through the National Rifle Association (NRA).

However, following the passing of his father in 2004, Jerrod made the tough decision to step back from instructing for a short time.

It wasn't until 2010 that he decided to move forward and continue with his father's dream of offering a variety of classes at the range that he loved so much.

This time however, Jerrod, with Putnam County Sheriff Steve Fenwick's support behind him, wanted to open the range up to everyone and include rifle, pistol and shotgun classes.

"He (Fenwick) was more than receptive and really pushed me to really start it up again and take it to to the next level. He's been a big advocate in getting this started," Jerrod noted. "He's a big supporter of the Second Amendment and the peoples' right to self-defense." 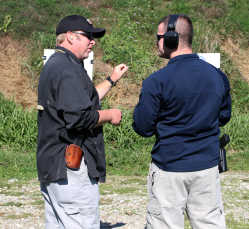 It took nearly six years for Jerrod to get everything in order to start his business, including the credentials as well as the insurance for both the instructors and the county.

Choosing the name for his business, however, was the one thing that came fairly easy for Jerrod as he focused in on both his father's and his mission of self-defense.

"I wanted something really that was truly defense oriented," Jerrod explained. "The thing I like about the word guardian is it's self-defense oriented."

All class sizes are relatively small to provide each student with the proper instruction time.

"I think the most important thing that you get out of an organized class is things that work and don't work, both learning and safety methods," Jerrod said. "I believe in organized training as opposed to self-taught.

"It's skills based. It can take five times as long to figure it out on your own or seek instruction from somebody who has learned it from others and is passing it down. I think the important thing is passing down those skills, sooner than later."

Jerrod has been a police officer for more than 19 years and has spent 16 years in the law enforcement firearms training field. He's certified in multiple firearms training and has won several awards over the years.

It is Jerrod's many years of training and experience that makes the Guardian Firearms Academy the ideal place for those at any experience level to learn about firearms.

"Just having a firearm is a false sense of security," Jerrod said. "It makes you no more prepared for a bad situation than someone saying that because I own a guitar I'm a musician. Going through organized training, you come out with gun handling safety and a skill set. It increases your confidence level to be able to use it." 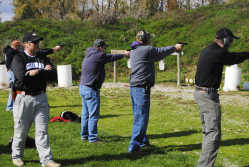 "Training is nothing more than preparing," Jerrod said. "You're spending the time and the money to use this training, but I truly hope you never have to shoot someone. But, if you do you'll be prepared for it. You'll come out on the other end without getting hurt."

Over the years, the Guardian Firearms Academy has continued to grow in size, offering more classes as the years go on.

In order to keep up with the demand Jerrod has brought in his cousin and guest instructor Justin Tate, who provides support as a safety officer as well as teaches the NRA Basic Pistol class.

Having two instructors for some of the larger classes is a necessity when safety is the main goal of each class.

The Guardian Fire-arms Academy has strict safety policies in place to ensure the safety of not only instructors but participants as well by having the proper waivers as well as having in-class instruction before participants are able to shoot a firearm.

"It's something that has to be there," Jerrod said. "It's a big thing in today's world to make sure everyone is covered with something. Firearms are firearms and if you don't respect them and slip up you can get injured with them. Safety is a big issue. Not only with insurance, but the way we handle ourselves on the range."

There are only two classes left before the year comes to a close, both of which do not require an Indiana Handgun License.

This beginner's class is for those who have a pistol at home for personal protection. Students will be taught working knowledge of their handgun.

The second is also a home defense pistol class that will take place on Sunday, Dec. 1 and is open to both men and women and will run from 2-4 p.m.

"None of this would be going on if it wasn't for my dad starting the whole thing. Without the range being built there," Jerrod concluded. "He actually sent me to my first instructor school down in Evansville because he wanted me to get certification. He knew how important it was to get organized training as an instructor. That's how I got started was with his encouragement."

For more information or to register for a class or private training visit www.guardianfa.com. All classes require pre-registration.