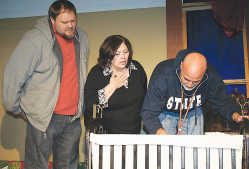 BRAZIL -- Four Putnam County residents have roles in the latest stage offering by the Community Theatre of Clay County, three as actors and one as the director.

The troupe will perform "The Miracle Worker" at the Lark Theater in Brazil Nov. 1-2.

"The Miracle Worker," a dramatic retelling of the story of the relationship between teacher Annie Sullivan and Helen Keller.

The drama will be directed by Ric McFadden, a Greencastle resident and a familiar face at the Putnam County Playhouse in a number of capacities.

Bond, Roberts and George are all from Putnam County. Whicker resides in Hendricks County.

The play begins immediately after the buffet dinner, which begins at 6:30 p.m. Tentative start of the production is 7:30 p.m.

Ticket cost, which includes the buffet meal, is $25.