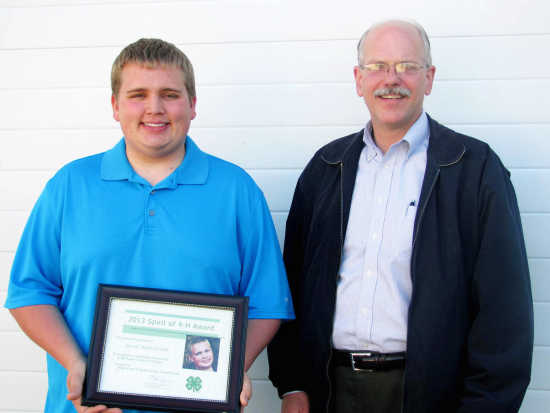 Jacob Robertson displays the 2013 Putnam County Spirit of 4-H Award, which is the highest award offered by the Putnam County 4-H program. Congratulating Robertson is Scott Herrick, representing Hopkins-Rector and Bittles and Hurt funeral homes, which sponsors the annual award.

Putnam County 4-H families joined together Sunday afternoon to recognize volunteers and acknowledge the achievement and accomplishments of 4-H members.

The highest award in the local 4-H program is the Spirit of 4-H Award, which is sponsored by Bittles and Hurt and Hopkins-Rector funeral homes. The 2013 winner is Jacob Robertson, who was presented with a framed certificate and a cash award by Scott Herrick representing the sponsors.

"We are proud to annually sponsor this top 4-H award honoring an outstanding 4-H career," Herrick said Sunday. "The Spirit of 4-H award has been awarded since 1991."

Robertson, the son of John and Kelly Robertson, is a 2013 North Putnam High School graduate and currently is a freshman studying at Lake Land College in Mattoon, Ill., majoring in business administration.

"I would like to thank the award sponsors, 4-H supporters and volunteers who have made it possible for me to win this prestigious award," Robertson said.

When asked who was of significant influence to his 4-H career, Robertson noted, "My mom and dad were significant in motivating me and keeping me involved with the 4-H program. I am very thankful for the volunteers with the shooting sports program especially Laura Lee Baugh."

Robertson also cited the many state and national 4-H conference opportunities that helped to mold and shape him during his 4-H career.

"Jake will certainly be missed," Putnam County 4-H Youth Educator Mark Evans said, "as he helped significantly in the Exhibit Hall, engaged in numerous Junior Leader activities including serving as co-president and was very good in working with youth at 4-H Camp. He also contributed to the program by completing more than 110 projects during his 10-year 4-H career."

Other awards during the afternoon program included recognizing the 2013 First-Year 4-H award winners Nathan Ladd and Sonora Erwin who completed 14 and 9 projects, respectively.

Robertson was recognized with Home Economics 10-Year Member Award, which is presented by the Putnam County Extension Homemakers Council to the 10-year member who completes the largest number of home economics-related projects.

The awards are based annually on the "My Record of Achievement" forms submitted by the 4-Hers, Evans noted, Extension staff members and 4-H Council members review forms to assign points, which ultimately determine the award winners.