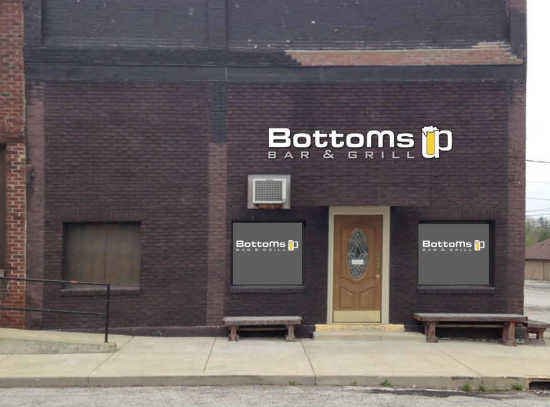 Purchased in February, Bottom's Up Bar and Grill is now open. The newly renovated bar boasts a game room complete with pool tables as well as renovated dining room. Above is an artists rendering of what the new signage will look like.

It's been a long process, but the building that most recently held the Old Topper's Steakhouse will reopen under a new name and new owners.

The Old Toppers building was under foreclosure and purchased in February by McPub's, the family corporation of Brent McCammack, with the goal of redoing the entire inside and getting it back up and running.

"I just thought it was a great business opportunity," said McCammack who is co-owner with his daughter Gabrielle. "This side of town needs the business. I think we'll do well, there's plenty of traffic over here."

Neither of them knew exactly what they were in for as they had nearly had to gut the entire building, which had a bad roof, terrible bathrooms, stale beer that was left in the taps, along with many more issues.

"Old buildings have character that you can't get anywhere else," McCammack said. "I didn't change anything structurally. I really just cleaned it up."

It may have taken quite a bit of time, but all issues were addressed by the help of friends and family and a few community members, including Sentra Bandy who came up with the bar's new name, Bottoms Up Bar and Grill.

"I've got some local people helping me," McCammack said. "You grow up on a farm you could do anything. You learn so much."

Several of the things addressed included installing new flooring, lights, fixing the leaky ceiling, renovating the bathrooms and scrubbing the kitchen for weeks just to get things manageable. It also took several weeks to get things such as a liquor license, credit card machines, training and ordering new signage.

"The kitchen wasn't taken care of. We had to throw half of the kitchen equipment out that I was hoping we could use," McCammack said. "It's an old building. Nobody's taken care of this place in years."

It's been a long journey, but finally the bar is up and running and is now open to the public, following a soft opening which occurred on Saturday evening.

The newly renovated bar and restaurant will include a full menu and a large game room, complete with pool tables and even a poker table.

It is also expected that Bottom's Up will host live music a few times a month, which will showcase local acts.

As for the past reputation of Old Topper's, McCammack isn't worried.

"You just want people to know they're welcome," McCammack said. "You want them to be comfortable. You have to keep control of the environment and let people know they're going to be safe."

In the future, McCammack hopes to turn the upstairs portion of the bar into more of a dance club, which will focus on DePauw University students. However, as of now all eyes are set on opening night.

Bottoms Up is located at 727 S. Main Street and will be open Tuesday through Sunday from 4 p.m.-1 a.m., with Friday and Saturday staying open till 3 a.m.