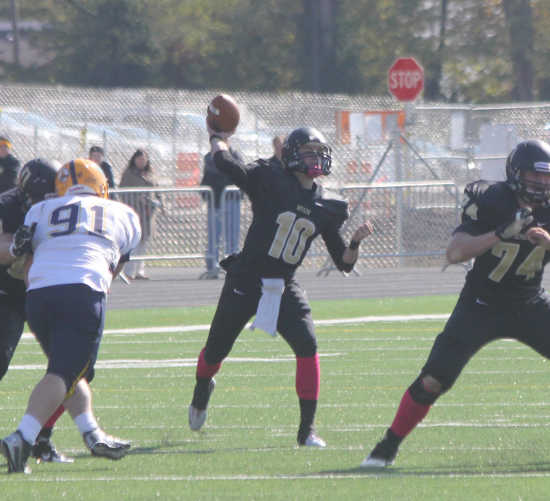 GREENCASTLE -- When Bill Lynch began his second training camp as coach the DePauw football team this fall, he knew the road ahead and he knew how he wanted to get there.

He needed good athletes, good students and big plays. It's too hard to sustain drives at this level, Lynch said, so grinding out long drives and trying to control the clock wasn't going to be the first option.

To get there, the Tigers started with a dynamic wide receiver who can stretch the field and bail the team out. Senior Barry Flynn was an all-North Coast Athletic Conference basketball player last season before joining the football team in his final semester.

He played tight end at Ball State University for a season before transferring to DePauw, and at 6-5, 225 pounds, he quickly became the No. 1option for the Tigers.

Flynn had at least six catches in each of the first six games for the Tigers and added four catches for 89 yards and a touchdown last week.

To go with Flynn, the team also needed dynamic, quick-hitting running back to balance the offense and create big plays from the backfield. Senior Nikko Sansone, a transfer from Missouri who spent his first couple years at DePauw as a wide receiver, was converted to running back after week 2.

He missed last week's game with a shoulder injury, but he's still rushed for 636 yards this year, 19th-best in DPU history. Sansone has been easing back into practice, but Lynch expects him to play Saturday against Wabash.

The third, and maybe most important transition this season, was installing a quarterback to execute Lynch's plan. Sophomore Justin Murray was the Tigers' starter much of last season and he began this year in the same role, but freshman Matt Hunt emerged from a crowded pack, working his way up the team's depth chart all the way to the top.

DPU opened camp with 12 quarterbacks on the roster, seven of them freshmen and two, Murray and junior Drew Seaman, with experience. Hunt swooped in and stole the show.

He debuted in week two, playing six series, then took over in the second quarter of week three and has started ever since.

Hunt has an aggressive mentality and willingness to throw down field, but he also avoids tough spots and interceptions.

The three top offensive players will be counted on Saturday, but Lynch said it takes more than skill position talent to handle the Wabash defense. DPU's young offensive line will be the key for its offense.

"Our biggest concern is we we've got to be able to pass protect, because that's what they do such a great job of," Lynch said. "They are really aggressive. They get you into third down situations and they've got, for this level, a pretty sophisticated blitz package where they come at you from a lot of different angles, and they do it with some pretty good players.

"As a result, they create all kinds of turnovers."

Limiting turnovers is one of the things DePauw (4-5, 4-4 NCAC) has done well. Hunt has thrown just three interceptions and the Tigers have only lost seven fumbles.

Facing Wabash is the best challenge DPU has faced on that front, and Lynch knows the Little Giants are among the best teams in the country at forcing turnovers.

The key, Lynch said, will be to mix his teams' desire to capture big plays with an ability to stay out of third-and-long situations and sustain drives, a skill DePauw has improved upon throughout the year.

After week three the Tigers were possessing the ball less than 28 minutes per game. That number has flipped in the six weeks since.

Despite the apparent disparity in records and stats, the Tigers are expecting a close game, as Monon tends to be.

They're never more than a play from scoring, so if they can keep it close and quicken the game, the Tigers are a threat to steal a win and take the Little Giants down the NCAC standings.

Lynch's ultimate goal, he said, is to one day have the NCAC come down to this final game.

This article will also run in the Crawfordsville Journal Review later in the week.