Simon Paul Delancey Wilson, 39, who was named president and Chief Executive Officer of the Fillmore-based lawnmower manufacturer in October 2011, was arrested Thursday morning in Plainfield where he was reportedly attending the closing on the sale of his home there.

Initially lodged in the Putnam County Jail at 11:15 a.m. Thursday, Wilson bonded out at 6:50 p.m. and made his initial appearance in Putnam Superior Court Friday morning in a brief hearing in front of Judge Denny Bridges.

The judge entered a preliminary not-guilty plea for Wilson, represented by Indianapolis legal counsel, and scheduled a pretrial conference for 8:30 a.m. Feb. 12.

Charged with theft, a Class D felony, Wilson could face six months to three years in prison and a fine of up to $10,000 if found guilty. 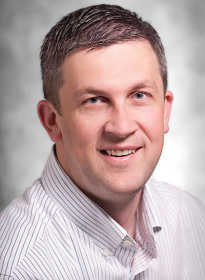 A report by investigating officer Det. Pat McFadden of the Putnam County Sheriff's Department alleges that Wilson stole $18,705 in cash and merchandise from the rewards account set up on a corporate American Express Card issued to Magic Circle Corp. in Wilson's name.

He reportedly collected the rewards points from company expenses that were charged to the corporate credit card, allegedly converting them into 17 American Express gift cards of $1,000 each and $1,705 in merchandise he reportedly had sent directly to his Plainfield home.

Wilson has been living and working in Fargo, N.D., since he was asked to resign this past June for "misrepresenting the corporation's financial position," a probable cause affidavit states.

Wilson was elevated to head up Dixie Chopper operations in October 2011 after then-president Gary Morgan was also asked to resign for reasons unrelated to this incident, court documents note.

Morgan was also issued one of the two original American Express cards acquired when the account was initially opened, Det. McFadden reported. Eventually more cards were added to the account, totaling approximately 40 in 2013.

The investigation determined that Wilson did not have Magic Circle Corp. board approval to open a corporate account, as required by corporation bylaws.