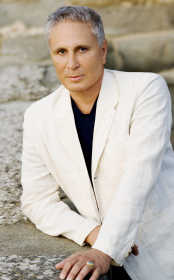 John Corigliano, arguably the most important American composer alive today, is artist-in-residence for the DePauw School of Music's 12th annual Music of the 21st Century. General admission tickets to festival performances on Feb.13 and 14 are $5. Tickets for students, seniors and children are free.

For the 12th annual Music of the 21st Century festival, DePauw University School of Music will host internationally renowned composer John Corigliano, whose imaginative works have been recognized with a Pulitzer Prize, four Grammy Awards and an Oscar for best film score.

The five-day fete slated Feb. 10--14 at the DPU Green Center for the Performing Arts brings some of the world's most celebrated composers to campus each year.

Underwritten through the support of alums Robert A. and Margaret A. Schmidt, members of the DePauw class of 1969, the series provides invaluable opportunity for personal interaction with monumental American artists, allowing students and faculty to study, perform and share with audiences music written not long ago and far away but in the present.

This year's residency encompasses a full calendar of master classes and coaching sessions, along with two concerts.

A performance on Thursday, Feb. 13 in the Green Center's Thompson Recital Hall, which will be followed by a reception for the artist, will focus on Corig-liano's smaller solo and chamber works, including "Mr. Tambourine Man: Seven Songs by Bob Dylan" (2008 Grammy Award).

For Friday's gala closing concert, the DePauw University Band, Choirs, Orchestra and Opera Program will perform works for large ensembles, including a scene from the opera "The Ghosts of Versailles" (1991 Metropolitan Opera commission) and "Symphony No. 1" (1991 Grawemeyer and Grammy Awards).

Born in 1938, Corigliano, a native New Yorker definitely has music in his DNA; his mother was an accomplished pianist and educator, and his father, John Corigliano Sr., was former concertmaster of the New York Philharmonic.

Today the younger Corigliano is, it could be argued, the most important American composer alive, with a catalogue of well over 100 scores, most considered major works. He is also one of the few living composers to have a string quartet named for him, coincidentally, formed by a group of players from Indiana who banded together after a performance at Indiana University in Bloomington.

The composer's first chamber score, his "Violin Sonata" (1964), has become a standard of the American violinist's repertory, having been performed hundreds of times and recorded dozens since the Spoleto Festival awarded the piece first prize in its inaugural Chamber Music Competition.

One of his more recent chamber works, "Winging It: Improvisations for Solo Piano" (2008), will be performed Thursday night by DePauw faculty pianist May Phang, along with his earliest song cycle "The Cloisters" (1965), written with William M. Hoffman, who also wrote the libretto to "The Ghosts of Versailles."

The composer himself loves listening to new music -- others in addition to his own.

General admission tickets to Music of the 21st Century concerts are $5. All coaching and master classes are free and open to the public, and admission to School of Music events is always free to all students, seniors and children, as long as tickets are available.

For more information, including a detailed schedule, visit www.depauw.edu/music, or contact the Green Center at 658-4827. Tickets may be purchased in person at the GCPA box office (605 S. College Ave.) or online (www.depauw.edu/music/tickets).